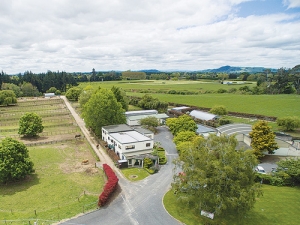 CRV AmBreed is selling its 13.7ha bull farm in Waikato.

At least 3000 bulls have been housed there since it was set up in 1969. At the company's peak production 200 bulls were housed on site at any one time.

Farm manager Dave Smith has worked on the farm since 1990 and speaks fondly of the bulls.

"I have a passion for the production side of our business and the semen collection work our team performs. I get a buzz out of ensuring we have the healthiest and most productive animals possible.... The move to a new facility will add to the credibility and achievement of this aim.

"These were top sires on the RAS list and many remained productive beyond their second crop of daughters."

The company has moved to a new production, distribution and logistics centre, hence the selling of the former bull farm.

CRV Ambreed operations manager Andy Medle says the company achieved several New Zealand firsts in at the old centre. "We were the first company to export live bulls for sexed semen production from our centre to America. Their semen was collected in the US, sexed and imported back into NZ for sale to local farmers."

"The old site became an EU approved collection centre in 2008.

"This allowed us access to sell our semen throughout the EU, a milestone for CRV."

Over the past year CRV Ambreed has moved its distribution to the new facility. All remaining bulls will be moved to the new site when facilities are built before the end of the year.

The firm's Bellevue centre has a semen collection facility and processing laboratory, storage space for export and domestic products, warehousing for 6000 artificial insemination banks and 38ha of grazing paddocks.

Herd improvement company, CRV Ambreed becomes CRV as the Dutch company brings together all its global business units under one brand name.