Fonterra makes changes near the top 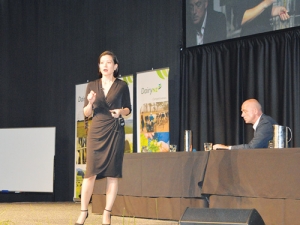 The departures herald a smaller seven-member executive group, says chief executive Theo Spierings. They will focus on achieving the co-op's ambition, he says.

"This is the right step in our evolution. We're keeping farmers at the heart of our co-op while focusing on our global customers and consumers."

Spierings says Chow, due to leave in early 2017, had been "instrumental in driving our transformation agenda [but] clear about her intention to retire from executive life". Until then "our co-op stands to benefit greatly from her wealth of consumer and business experience".

Swales will manage the co-op's transformation and disruption agenda, and all R&D and technology.

"With Judith heading up velocity and innovation we will get an end-to-end view of our efforts to drive efficiency... and a strategic view of game changing business models."

Meanwhile Alex Turnbull will continue to head Fonterra's Latin American business as part of the global consumer and foodservice business unit but will leave the executive team.