Wine is in Charlotte Read’s blood 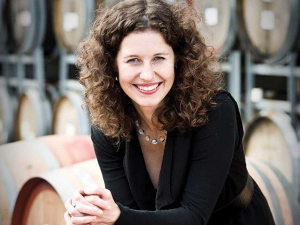 The new GM of Marketing for New Zealand Winegrowers can’t help but laugh at how she used to consider anything to do with grapes, “such a drag.”

Little did she realise, that all that work she put into helping her parents on their Hawke’s Bay vineyard, would play a major role in her future.

“It really is a small world,” Read says. “My Dad was keen for my sister and I to help out in the vineyard from an early age with the likes of ‘pulling out’ and it’s so funny that I used to think it was such a drag at the time. Little did I know that it was going to become my career.”

A double Science degree in Food Science and Nutrition, “because I thought we need to eat, so I will always have a job,” led to a placement for Read with Fonterra based in Singapore. The role was as a marketer on the South East Asia Graduate Programme, despite the fact that she kept reminding the officials she was a scientist not a marketer.

“They were looking for technical people to do marketing, so I never got to wear a lab coat.”

It was the beginning of a career that has seen her spend the last 20 years living abroad, gaining experience not only with Fonterra, but also Villa Maria and NZTE. Initially it was four years in Singapore, marketing nutritional milk powders. When the offer came up to move to Dubai, Read declined, instead opting to head to the UK, Cambridge University in particular.

“I realised that I was in the very fast paced commercial environment and I didn’t have the business training. So I went to England and did my MBA at Cambridge University. The rationale behind that was I wanted to do just a one-year course and I wanted a wonderful historic experience as well. So going to an 800 year old university was one of the most cherished years of my life.”

It’s all very well undertaking an MBA, but Read wanted to ensure that it would lead to a successful career, doing something she loved. Wine was something she loved, so all her papers had a wine slant. Her dissertation was on the competitiveness of the New Zealand wine industry in international markets.

“It was a great tool for me to demonstrate when I was pivoting my career from milk to wine, that I was really serious about it.”

Her first wine job was with the Thresher Group in the UK, which she describes as providing her with the opportunity to “get a great toe in the water.” Introducing herself to Sir George Fistonich at the London Wine Trade Fair led to five years as the company’s Europe export manager, dealing with 26 markets, from Ireland to Dubai.

“It was a whirlwind of five years, travelling to the likes of Russia, Sweden, Latvia, Bulgaria. It was a real pioneering phase,” Read says. “George Fistonich has always been quite adventurous and liked to be the first to a market and create the category, rather than having to compete heavily for market share later.

“It was an amazing time to develop my global wine knowledge juggling the Master of Wine course and sitting that challenge exam around my busy Villa Maria role.”

After five years Read swapped Europe for Asia, taking on the role of Villa Maria’s Asia marketing manager, with a big chunk of her time based in China. She continued with her Master of Wine studies for a time, but then when children entered the equation those new demands on her time and energy led Read to place the MW on ice, for now at least.

Keen to expand her experience outside of wine for a time and after five years as Asia market manager, she took a role with New Zealand Trade and Enterprise (NZTE) in China.

“I became the Food and Beverage Programme Leader for Greater China, based out of the New Zealand Embassy in Beijing. It was a big change moving from a New Zealand wine business to a government post, especially being an off-shore government post.”

In 2017 Read moved back to New Zealand, as a customer manager for NZTE, which has provided her with an even greater perspective on helping New Zealand businesses grow internationally.

“It is one of the organisations where you really feel like you are working for a cause. It’s the first time I have felt that, helping companies grow bigger, better, faster.”

All her previous roles have helped provide her with skills that can only benefit the New Zealand wine industry.

“It has helped me understand the New Zealand exporting journey and the challenges. There are parallels that all companies from New Zealand face when heading off shore. My time at NZTE has really emphasized to me the importance of focus. We are a small country and if we focus our energies in a more direct way, the outcomes can be potentially greater. If you spread yourself thinly, without that focus, you compromise.”

She strongly believes in customisation when it comes to export markets.

“What may work in England may not work in China. It can’t be a cookie cutter approach. I think that customisation needs to continue, and listening to where the market is at. Because markets don’t stay still, they are evolving all the time. It’s about keeping close to that evolution.”
As GM for Marketing for NZW Read believes the way we, as a uniquely gifted wine producing nation tells our story, needs to continue to evolve to resonate with a changing global audience. “How a ‘millennial prefers to digest information about wine is very different to someone who has had wine as part of their repertoire for many years.”

Read says she’s looking forward to helping the industry gain a deeper understanding of our core drinkers and their drivers for selecting New Zealand wine, to ensure we are a long term proposition. “That is where I feel really passionate about the job.”

Given everything Read brings to her new role with NZW, there should be some exciting times ahead for the industry.

How to stand out online

Humans are supposed to be the most intelligent species on the planet. How then do you explain that the average human attention span is only eight seconds?

Stories are what sell your wine.

According to a recent report by market research company Morgan Stanley, Generation Y or “Millennials” (those born between the early 1980s and the year 2000) have shifted their drinking habits dramatically in the last few years.