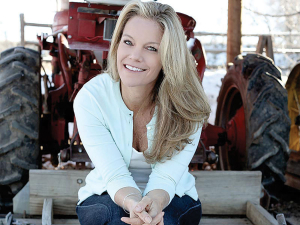 One in 13 children in the US has food allergies.

One in 68 children in the US has autism.

One in 10 children in the US has asthma.

One in three children in the US has asthma, allergies, autism or ADHD.

Cancer is the leading cause of death by disease of children in the US.

Those are the cold hard facts, presented by Robyn O’Brien at the Organic and Biodynamic Winegrowing Conference. Are the allergies and other illnesses due to the food children are eating, or what has been done to that food? That was the question O’Brien sought to answer when her own daughter developed food allergies almost overnight.

The Vice President of rePlant Capital and the author of The Unhealthy Truth, a book about the health of the American food system, O’Brien has been labelled by Bloomberg as “food’s Erin Brockovich.” She has helped lead a food awakening among consumers, corporations and political leaders. And she has pesticides and genetically engineered food squarely in her sights.

“The first introduction of a genetically engineered product into the US food system was an artificial growth hormone called rbGH,” she said. “It was inserted into our dairy cows to make more milk. It made a lot of sense economically, hoping to bring down the cost of milk for American families and families around the world.”

The only problem was that rbGH made the cows sick, causing critical lameness, increased mastitis and ovarian cysts. To compensate for that, the cows were fed antibiotics.

“Eighty percent of antibiotics used in the United States, is used on the animals we eat.” O’Brien said.

It is not only milk that it filters down into – it is cheese, ice cream, yoghurt and other products. That horrified O’Brien, who has four children.

“I began thinking, how many sippy cups did I put this milk in? How many bowls of cereal have I poured it on.

O’Brien went on to explain that since genetically engineered foods were introduced into the US, sales of the weed killer roundup “skyrocketed.” That is despite the US Environmental Protection Authority having stated back in 1985 when they were reviewing the key ingredient Glyphosate, that it was a “probable human carcinogen.”

“In 1991, just before the introduction of genetically engineered crops that are referred to as Roundup ready crops, the US EPA reversed its decision and said it is safe,” O’Brien said.

The fact three legal cases of 13,000 against Monsanto have already been through the court system with all the plaintiffs winning, is enough to show that EPA decision reversal was a catastrophic mistake.

But O’Brien wasn’t all doom and gloom. She said she is not fatalistic; “as a mother four I cannot afford to be.

“I think it is going to be an incredible moment in human history when we look back on this dark period in agriculture, and we will be able to say we designed a better system. That we engineered our way out of this, with enthusiasm, creativity, innovation, passion and love. Because for me that is the only way forward, it is the only story I want to be able to tell my grandchildren.”