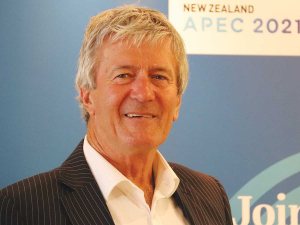 Agriculture and Trade and Export Growth Minister Damien O’Connor will be heavily involved with the APEC conference.

New Zealand will be in the virtual spotlight for the next 12 months as it hosts the APEC (Asia Pacific Economic Cooperation) conference.

It’s only the second time that NZ has hosted this event – the last time was in Auckland in 1999.

APEC was set up on the initiative of former Australian Prime Minister Bob Hawke in 1989 and NZ was one of 12 founding members. Today, 21 economies are members of APEC. They include the USA, Canada, Japan, Malaysia, Singapore, Indonesia, Korea and China, all of which are major markets for NZ’s primary exports.

The theme for this year’s event is ‘join together, work together and grow together’ and will see NZ virtually host thousands of delegates, representing 40 different groups and committees in 11 time zones and at times spanning a 17 hour time difference. The groups will be a mix of officials, various business groups, including the primary sector, and politicians – including heads of state such as Prime Minister Jacinda Ardern.

One of the key government ministers involved in APEC 2021 is Damien O’Connor who is involved via his roles of Trade and Export Growth as well as Agriculture.

“Clearly APEC is a huge opportunity for NZ to be on the world stage in front of 21 economies, a large number of which are our key trading partners,” he told Rural News. “We will be working collectively on the huge challenges that we face – especially Covid 19 and obviously trade.

“We will be looking at the best ways to interact with each other and how we exchange goods and services and technology. What’s really important is that APEC, as an organisation, has been a solid supporter of the World Trade Organisation, (WTO) and rules of trade. So, any progress in terms of endorsement from APEC in this time of uncertainty for the WTO will be invaluable,” he says.

O’Connor describes APEC as multi-dimensional and multi-layered, which means that his colleagues such as Foreign Affairs Minister Nanaia Mahuta will also play a huge role in the discussions. He says the role of ministers is to engage with other countries at a political level and to assist officials and business people working on the various trade negotiations taking place.

“Regardless of the range of discussions that are taking place in APEC, trade is a high priority for us and we’ll be looking to get backing for preventing any move towards protectionism,” he told Rural News.

“Clearly the primary sector is at the core of our export trade and economy. Any connections or opportunities that we get to engage with the other economies to discuss some of the tariffs and especially non-tariff barriers rules or trade will be an advantage to us in both in the short and long term.”

In terms of world trade, O’Connor says he and others will be looking closely at what the new Biden administration say in terms of rules-based, free trade and the role of the WTO. Biden has pledged to “rewrite the rules of trade” but has been tight lipped on the issue of the WTO.

There are other trade issues for the new US President to deal with – such as China and EU and UK. But environment, specifically climate change, has been signalled as a priority for Biden and this will inevitably surface during the APEC discussions over the coming year.

O’Connor concedes that, initially, Biden will have a focus on domestic issues such as Covid.

The challenges of virtual

Apart from being a forum for some tough and difficult conversations, APEC conferences have until now been a glitzy public relations exercise, where the host country can showcase its economic and cultural dimensions to delegates.

A chance to promote tourism is an obvious example.

But Covid-19 has changed that and NZ has been given the almost impossible challenging task of doing that remotely. Special venues have been set up to host some meetings based out of Wellington. O’Connor says it’s a challenge to have an international convention in a virtual world.

However, he says given the uncertainty of Covid, the Government thought it was better to go for the virtual option, rather than cancel the event.

“The virtual world means that you spend less time travelling and more time communicating. There are some huge advantages in terms of efficiency in the virtual world and we all learning to trust it more and more as we learn to better use it. But it’s hard to create a dynamic environment in the virtual world, particularly when we would like to talk more with one another about more detail. But we have to keep focused in digital fora, on the job and topic and it does create more efficiency – even though it is slightly less friendly,” he says.

The other element missing in a virtual world is the presence of media. Normally thousands of journalists would descend on the host country for various sessions – especially the leaders’ meeting, which will take place in early November.

The Ministry of Foreign Affairs and Trade is doing its best to engage with the media – both in NZ and overseas. It has sent out 3500 information packs to media packs to media around the world to brief them on this year’s event and about NZ.

OPINION: Moves by the Government to end New Zealand's live export trade is more about politics than ethics.

Live exports dead in the water

Concerns about the threat posed to New Zealand's trading reputation by live animal exports from this country have led to a move to shut down the trade.

Government to invest in wool carpet

The Government announced this morning that it will be supporting a new project with New Zealand wool carpets company Bremworth.