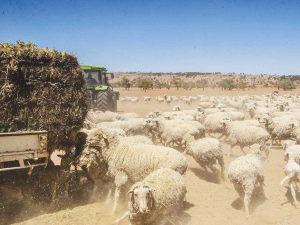 According to MLA’s 2020 Sheep Industry Projection, stock numbers have been dropping due to drought in key sheep producing regions.

The Australian national flock underwent a significant decline in 2019 as breeding ewes continued to be offloaded: marking rates were negatively affected by ongoing drought in many key sheep production regions.

MLA senior market analyst, Adam Cheetham says the national flock is forecast to fall 3.5% to 63.7 million head by June 2020, representing the lowest national flock since 1904 and a cumulative fall of 12% since June 2017, prior to the latest drought.

“The impact and severity of consecutive drought years will be felt across both sheep and lamb supply in 2020 and for a number of years to come,” Cheetham says.

“This reflects the impact of the diminished breeding flock, generally lower marking rates and the expectation of greater retention of ewe lambs on-farm,” says Cheetham.

However, there is a silver lining to the decline in sheep numbers.

Australian sheep farmers should continue to receive record lamb prices this year, according to Cheetham.

Despite the poor weather conditions, average national carcase weights improved last year and will again lift this year, helping to offset the impact of reduced slaughter on sheepmeat production.

This is due to the growing prevalence of supplementary feeding or lot feeding lambs, improved pasture availability and strong price incentives to feed lambs to heavier finished weights, Cheetham says.

“As a result, lamb production is forecast to remain stable at 500,000 tonnes carcase weight (cwt), despite a decline in slaughter.

“The impact of the decrease in sheep slaughter will not be offset by the expected increase in sheep carcase weights of 2% to 24.7kg/head, with mutton production forecast to fall 21% to 178,000 tonnes cwt.”

Cheetham said production could fall further if average to above-average rainfall is experienced in the southern sheep production regions in the first half of 2020, as producers look to rebuild.

“The environment through 2020 is expected to remain much the same, supporting prices, but uncertainty regarding global trade policy and China’s appetite for meat imports due to African Swine Fever and coronavirus should not be disregarded.

Australian lamb exports are forecast to break records again on the back of this robust international demand.