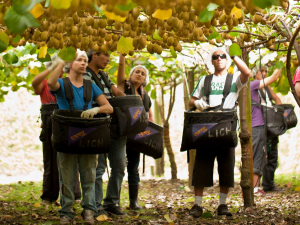 Claims that vacancies in our agricultural and horticultural can be filled by out-of-work New Zealanders is both naïve and ignorant.

OPINION: It's time for some real and fast action around allowing more seasonal workers into the country to help power NZ’s all-important agricultural and horticultural sectors.

There are no more excuses for the hopeless lack of activity in this area, from both the politicians and bureaucrats.

For months we have been hearing endless reports about a lack of suitably motivated and qualified workers in numerous parts of the primary sector – including fruit pickers, shearers, tractor drivers and vets to name just a few.

The closure of NZ’s borders due to Covid-19 has only further exacerbated the problem, but it needs to be addressed and now. The head in the sand approach taken by the Government over this issue can no longer be tolerated.

Claims that vacancies in our agricultural and horticultural can be filled by out-of-work New Zealanders is both naïve and ignorant. It would have happened by now if it was realistic.

Many of these jobs require skilled, experienced workers and cannot be filled by people just coming off the street. Also, a lot of this work is seasonal, temporary and based in regional areas. It is unrealistic to expect people with families and homes in urban centres to pick up their lives and move far away to take on jobs – many of which they are totally unsuited and unqualified for – that may only last a few months.

The fact is, already many of our horticultural crops are at risk of not being harvested and processed due to the unwillingness of government to tackle the huge lack of available labour in the sector.

We keep hearing calls from apple, kiwifruit and strawberry growers that their crops are at risk of rotting and going to waste instead of being picked, packed and earning valuable export income the country desperately needs.

Agricultural contractors have been warning for months about a lack of drivers meaning crucial hay and silage may not be harvested this year. A lack of shearers means that sheep may not be shorn, and serious animal welfare issues may arise.

Meanwhile, other animal health and welfare issues loom due to a lack of vets around the country.

NZ can no longer keep its doors shut to crucial key overseas workers we need to keep this country going. This does not mean the quarantine and testing measures are ignored – and all this will be paid for by the industries needing to import these workers.

How can the country keep moving if our key primary sectors are not working at 100%?