Love is in the air at Fieldays 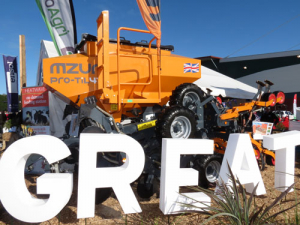 The word relationship at Fieldays is really important and means many things to many people.

For many, the National Agricultural Fieldays is about the hard sell, the order book, the new lead, the prospect of a deal of a lifetime. It’s about striking that special relationship between a willing buyer and a willing seller.

The word relationship at Fieldays is really important and means many things to many people. Take for example the rural bachelor of the year where throbbing hearts and testosterone meet in the field.

Then there is that irresistible love affair which farmers, male and female, have with Mystery (or is it mistress?) Creek finding themselves drawn like moths to a light into the world of huge tractors, effluent spreaders, calf rearing units and technical apps of all colours and hues.

But at a deeper level this year the word Brexit is on the lips of the city futurists and the politically aware and sensitive. A new love story is emerging as Britain prepares to leave the EU and turn back the clock a mere 100 years and, like the US return to a world of splendid isolation – well sort of.

For its part NZ wants a free trade agreement with the EU and with the so called father of the bride gone in the form of the UK, other European states are staking their claim to escort the bride NZ to the EU altar of an FTA. We have the Dutch staking a claim for this role, given that after Maori one of their countrymen was the next person to discover the land of the long white cloud and that many of Able Tasman’s countrymen have made NZ their own.

But now the ever romantic Irish have begun the courtships of NZ with their ambassador suggesting that language and heritage between the countries entitles Ireland to the role of father of the bride. Is it the roguish Irish or the in your face Dutch who escort NZ to the EU FTA, or will they walk each side of NZ and help marry us to the EU for more better than worse and for more richer than poorer until Donald Trump and/or his Russian mates splits the world asunder?

What is evident at Fieldays is that romance is in the air and if NZ can quickly win the heart of the EU then the pain of the Brexit divorce may less than expected and NZ can live happily ever after.