A tale of two shows 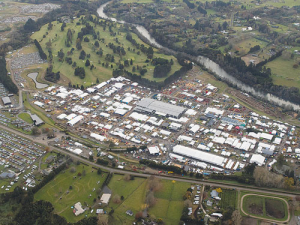 The regional field days circuit is done for 2019. Now there's the National Fieldays in June.

OPINION: There were clear winners and losers in this year's regional field days circuit.

The regional field days circuit is done for 2019, leaving only a short march to National Fieldays in June.

One thing for sure, the jury was unanimous in declaring winners and losers – singing the former’s praises and holding their heads in their hands over the latter.

Is there a place for such events, given that technology sees larger and larger machines emerging while show sites stay the same size? Fact is that for the time being, manufacturers and rural suppliers still support these regional events.

Event organisers might be expected to go out of their way to make things easy for exhibitors to display their wares, but... yes and no.

The event now making the others appear pedestrian in this respect is the South Island Agricultural Fieldays (SIAFD) held at the purpose-built site at Kirwee, 20km from Christchurch.

It’s organised by a volunteer force with a high percentage of farmers, and they truly understand what attracts rural folk and, in turn, suppliers to the event.

The third biennial SIAFD recently finished at the Kirwee site, where wide metalled roads make access a breeze and large sites hold the largest machines. Its 10ha demo area sports crops of grass, lucerne, maize and fodder beet, allowing manufacturers to put machines through their paces – with an occasional cock-up – to the delight of the crowd.

Also impressive at the SIAFD is the can-do attitude. Stroll in through the gate at 7am with plenty of other rural folk, grab some breakfast at the catering marquee then be out among the sites by 8.00am.

Safety is always underlying, but not overbearing: the event staff respect the fact that most rural folk know tractors and machinery can be dangerous and gravity causes things to fall out of the sky.

Compare that with the field days at Manfield Park, Fielding, a fortnight earlier. This overtly commercial event appears to have forgotten who their target audience is and seems fixated only on getting numbers through the gate — a joke.

Large queues form at the outer main gate, are let in to an inner gate but then are told the event doesn’t open until 9am because of site safety. Whoops! Imagine how this goes down with a Hawkes Bay farmer who left home at 6am and needs to get back for afternoon chores. And when she at last gets in she has to cope with far too many events and safety officials riding round on UTVs and quads.

That lesson in safety is also dished out to the exhibitors, particularly during the build-up to the event.

Exhibitors recalled stories of over-zealous safety staff boring into them about the key safety tactic of wearing a hi-vis vest. Where’s their understanding of the complexities of modern farm machinery?

Some made fools of themselves with unfathomable demands. One big exhibitor who arrived not wearing a safety vest was ordered to park and then was escorted by a security guard to the headquarters tent to be told of the error of his ways. After the obligatory H&S induction he wondered how he’d managed to drive five hours through the central North Island without such help. He promised to try harder in future.

Field days organisers, at regional or national events, must listen to the people who help create them — the exhibitors — as without them they would have only a paddock. Many exhibitors are saying that things need to change.

The South Island has its field days finely ordered: alternate years at Gore and Christchurch – a scenario Northland, Central Districts and Mystery Creek might well embrace. Numbers through the gates are not the main thing.

The Mackenzie A&P Highland Show will be held on Easter Monday.

The latest in rural technology, equipment and specialist knowledge from around the world will be showed off next month at the Southern Field Days.