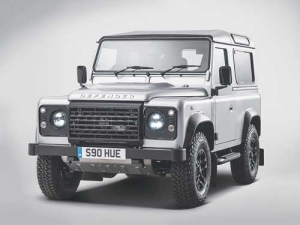 The company has now notched up 2 million Defenders, and though well short of the production numbers of, say, the Toyota Hi-lux or Ford F Series, it marks the loyal following this quintessentially British brand enjoys worldwide.

In the mid-1940’s Maurice Wilks, chief designer for the Rover Group, got inspired by an ex-WW2 Jeep on his farm in Anglesey, North Wales, during a summer break. While walking on Red Wharf Bay he drew in the sand an idea for a vehicle – a ladder chassis, two driven axles and a PTO drive, an 80-inch wheelbase and straight panels easily produced.

So in 1947, the Series 1 Land Rover went into production at Lode Lane, Solihull, the public seeing it for the first time at the Amsterdam Motor Show in April 1948; window price was 450 pounds. It became an overnight success as a no-nonsense vehicle that appealed to farmers, and to landowners who wanted off-road capability -- easy to drive, service and repair.

Farmers in particular used the PTO in static mode for driving sawbenches, etc and in mobile work for driving mowers and many other implements.

Configuration ranged from a simple ‘rag-top’ to a fully appointed 12-seat station wagon, powered by fours to thumping V8’s in petrol or diesel.

The ladder chassis provided a platform for customising into ambulances, fire trucks, snow ploughs and even cherry pickers.

The military bought them in huge numbers; a bespoke build included armour, gun turrets and specialised winches. A batch of 100 ‘Pink Panthers’ -- painted pink – went to the SAS for desert reconnaissance. These options also included forward control and a ‘lightweight air transportable’ version for dropping into campaigns by helicopter.

Company ownership moved in 1994 from the disbanded British Leyland Group to BMW. Ford bought it in 2000 and sold it in 2008 to the current owner, TATA of India. While the vehicles are still primarily built in Solihull, they are also assembled in Spain, Iran, Brazil and Turkey, and are part of a joint venture for building in China with Chery.

For nearly 70 years these vehicles were sold in series I, 2 and 3 and latterly Defender models. The first million milestone was hit in 1976.

Defender designed with NZ in mind

Can-am off-road vehicles' reputation for performance and durability stems from its heritage of building snowmobiles for the Arctic Circle and the wildernesses of Canada.

A New Land Rover -- Discovery Sport – is the first of the company’s new Discovery vehicle range. The compact SUV seats seven in an optional ‘5+2’ arrangement.