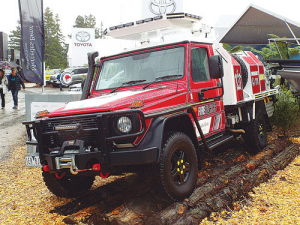 Prominently displayed at the Mercedes Benz site at Fieldays was a vehicle that gives merit to the saying ‘there’s plenty of life in the old dog yet’.

The venerable G-Professional cab chassis can trace its heritage back to the early 1970s when the Shah of Iran – a major shareholder at Mercedes – suggesting the company develop a military vehicle, which we know morphed into the ubiquitous G-wagon.

Now, 45 years later, the G-Professional might be termed middle-aged but it can still hold its own, and more, in a market dominated by youngbloods.

Shown in an interesting configuration, as a rural fire service vehicle that would have most brigades salivating, the vehicle produces 135kW and 400Nm from a 3.0L, V6 turbo-diesel that mates to a five-speed auto-transmission and three independent differential locks.

Looking at the vehicle’s abilities, a gross vehicle mass of 4470kg enables the truck to carry a 2085kg payload and pull a braked trailer of 3200kg, combining to give the G-Pro a combined mass of 7500kg.

With another National Fieldays done and dusted for the year it is an opportune time to reflect on the current state of New Zealand’s primary sector.

Ireland's Minister for Business, Enterprise and Innovation, Heather Humphreys, led a contingent of Irish businesses to the Fieldays last week.