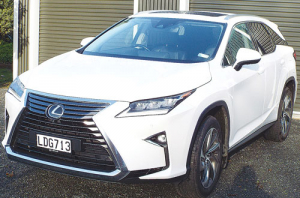 If you're a fan of the motoring pages in New Zealand newspapers, you will probably be wondering what was going on before Christmas with the annual Car of the Year Awards (COTY).

In one camp NZ Herald’s Driven magazine and the AA were trumpeting the Mercedes Benz A Class as the hero, while the Motoring Writers Guild of NZ gave the Subaru Forester top honours. The two quite different choices and the rationale behind them made for interesting reading, given that nearly all the judges were members of the NZMWG anyway. So they probably couldn’t make their minds up.

The other intrigue was the choice of Driven and the AA, given that two out of three new car purchases by the NZ public are utes or SUVs.

So your reviewer wonders what would be Crusha’s Choice of a 2018 CTOAPF (Car to Own and Pay For) given the fact that he owns and pays for cars rather than just driving around in car makers’ loaners?

Over 2018, Rural News has got behind the wheel of a wide range of vehicles, from high-end Jaguar Land Rover products to utes and SUVs and even a quirky VW Caddy van.

With fascination for utes being a bit like Vegemite (love or hate) I declare now that I will always favour a ‘soft-roader’, i.e. an SUV. Easy to get into, elevated driving position for over-the-fence farming, loads of space and a few creature comforts all score highly on Crusha’s preferred list.

So the one for me in 2018 was the Lexus RX350L. This might be a surprise to opinionated motoring writers who will shout derisively that it’s “only a bloody Toyota in a fur coat”.

“So, what?” I say. I own and daily drive a late-model Toyota Highlander -- the underpinnings of the Lexus. I know it will be as reliable as a Swiss Army Knife or a watch from that country and when time comes to say goodbye my trade will be worth money against any new purchase.

But what about the RX350L? First impression from the outside is one of up-to-date modernity with a hint of sci-fi from the angular lines, topped off by the L-shaped daytime running lights.

Given that it has the same 3.5L powerplant as my Toyota – with 221kW and 370Nm mated to an 8-speed auto-trans and AWD – then it should drive ok.

Standouts include door handles that illuminate as you approach after dark, and a cabin that lights up automatically too. Jump in and be cossetted by ergonomically perfect seats swathed in supple leather accentuated by stitching that sings quality – also a feature of the second and third rows of seats.

Driving position sees a large tablet-like display centrally located, while ahead of the wheel a head-up display covers speed, navigation, cruise and audio functions. Add in subtle yet appreciated driver aids like LED cornering lights, rear-view and surround cameras with park-assist and blind spot monitoring and you start to understand what this car’s about.

Smile at touches like wireless charging for your mobile device and touchless rear door opening; and let’s get real, we buy cars that make us smile, get us and the family from A to B safely and are not too hard on the pocket.

Lexus teams up with Farmlands

Lexus and Farmlands, the country’s largest rural supplies co-operative, have a new partnership.

What's new in machinery and products.

SUV with luxury on its mind

WE DON’T often get to drive a Lexus at Rural News, and it’s always welcome. We know we are in for something special when Lexus calls.