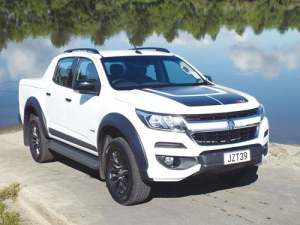 A few days driving the MY17 Holden Colorado made it plain to this reviewer that this vehicle has moved on a long way from the previous model launched in 2012.

Development inspired by 100,000km on roads in Australia and NZ has taken this vehicle to new levels. Heading into the season for predictions, Rural News forsees this Holden racing up the league table of the ever-increasing market for utes.

First impressions, on approach, are of a ute that really is a truck, with a presence and size that fills the average driveway.

Opening the door reveals a neat little design idea: to allow the doors to close ‘softly’ the windows open a centimetre to avoid the cabin pressure that otherwise would back up against the quality door seals.

Viewed from the driver’s seat the top-of-the-range Z71 model has some nice things: the functional layout centres on an 8-inch infotainment screen that sees to radio, phone, satnav and connectivity; immediately below are the heating and ventilation controls.

Seats are finished in high-grade black leather which, in the case of the driver’s perch, has electrical adjustment; the only negative is that the seat doesn’t go low enough for taller drivers, no doubt because of the electro-gubbins hidden beneath.

The 4-cylinder 2.8L Duramax engine indicates the refinement created during development. Although it has the same 147kW output, with fuel usage about 8.5L/100km, there’s little noise – in fact it’s as low as in many premium brand saloons.

The 6-speed auto box offers smooth, seamless shifts and acceleration is improved by a lowering of final-drive ratios.

Further tweaks to the suspension see an increase in the size of the anti-roll bars and refinement of the spring set-up in the rear. This gives the truck a car-like ride quality, particularly when empty, and it doesn’t suffer from the over-springing that seems to be the norm in this market.

Out on the road, 100km/h brings up 1500rpm on the dial and the 500Nm of torque offered by the auto transmission means few sprinters will out-drag you from the traffic lights.

Off-road, part-time 4WD allows the choice of 2H, 4H and 4L options, and traction is taken care of by electronics rather than differential locks, the only noticeable effect being a little wheel-spin before the electronics kicks in.

In practical terms, legroom and headroom are excellent and 3500kg towing capacity puts it up there with the best. It’s certainly one to watch in 2017.