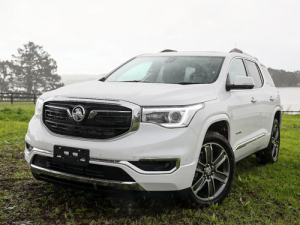 Two new reveals will feature on Holden’s site at Fieldays next week – part of a growing motor show at the Mystery Creek event.

The new Holdens are the all-new Acadia, a large executive styled seven-seat SUV, and the new Colorado Xtreme, a special creation inspired by the Xtreme Concept LCV displayed at Fieldays 2016.

Media got a sneak preview this week at ex-All Black Stephen Donald’s farm, south of Auckland. (Donald aka ‘Beaver’ will be at Fieldays as a brand ambassador for GM).

While the Xtreme gives Holden a stronger offering at the top end of the ute market, the Acadia – a big V6 powered SUV with an American flavour – will aim squarely at the Toyota Highlander.

Sourced from North America, the Acadia had significant Holden involvement from the beginning of development, said Warr. A handsome beast, it should appeal to Kiwi buyers.

Trax, Captiva, Equinox and Trailblazer are currently available at Holden dealers nationwide and will be joined by Acadia in Q4 of 2018.

Pricing for Acadia will be revealed closer to launch, while the Colorado Xtreme is available from $79,990.