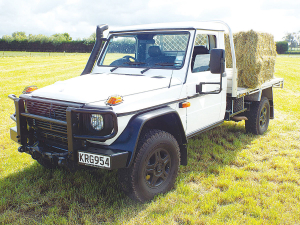 Driving the ‘G’ is a blast.

The Mercedes G-Class Professional is a military-grade tough, yet smooth, vehicle.

If we all bought on price there wouldn’t be any choice.

So before anyone throws up their arms in despair let’s say it: the Mercedes G-Class Professional is expensive.

Now let’s confirm another key point: it’s a very good vehicle. Not for looking cool parked outside your favourite city restaurant, but instead for taking anywhere in New Zealand and being sure of getting home.

In fact, this shouldn’t be a surprise, given its heritage dating back to 1979, with continuous manufacture and development at the same factory in Graz, Austria ever since.

The ‘G’ isn’t a pimped-out ute; instead it has a heavy-duty cab chassis aimed at hard-arse users such as municipals, lines technicians, firefighters, beekeepers and high-country farmers.

To say it’s tough would be like saying The Terminator is well muscled. The ‘G’ is military-grade tough, with durable mechanicals and minimal interference from any of that electrickery. A V6, 3L turbo diesel engine pumps out 135kW with 400Nm torque appearing early in the rev range. The motor is mated to a 5-speed auto box that’s as smooth as James Bond and, as you’d expect, permanent 4WD.

That’s ok on the road, where the ride is a little harsh, the steering a little heavy and creature comforts are few. But take it into the wop-wops of NZ and then you get what this 2.6 tonne truck is all about.

Selecting low range or any of the three differentials is a push-button task. It can be executed on the fly, though quite frankly you just point it where you want to go and it goes there. If it gets sticky, engage the centre-differential, very sticky, switch in the rear. If you get to the stage of ‘oh bugger you don’t want to go there’, switch in the front diff and get on with it.

Driving the ‘G’ is a blast once you’ve clambered up into the cab — no running boards, that’s too Ponsonby.

With the snorkel air intake just outside the driver’s window, you get a great sound of induction as the turbo spins up, and a side-exit exhaust emits an equally pleasing note.

And it’s big: over 5 m long, with a 3.5m wheelbase, a turning circle measured in hectares, 250mm ground clearance and 650mm wading depth. Towing is rated at 3200kg, payload is a useful 2085kg and wheel equipment is 19-inch alloys with sporting 265 section all-terrain tyres.

Creature comforts? In fact the G is sheet metal, rubber, vinyl, hard plastic and a fixed steering column. The slight nod to tech is a central locking system – for both doors – and air-bags up front.

But this is for work — bull bars, front mounting for winches, snow ploughs or blowers. Add in twin 12V battery systems, engine speed control to keep up alternator speed for high drain electricals, then you’ll get the idea.

It doesn’t have the kitchen sink but it does have rubber bath-plugs on chains for the drain holes in the footwells.

Compare it to the Toyota Land Cruiser ‘70 if you dare, but the folk from MB will tell you it’s a whole lot tougher.

While 2018 heralded the arrival of the long-awaited Mercedes X-Class ute, early 2019 brought with it the cream of the crop – the V6-engine X350.

It took a while to get here, but now it’s arrived the Mercedes X-Class has created a stir at the premium end of the buoyant ute market

The Mercedes-AMG G 63: Love it or hate it

Introducing the Mercedes-AMG G 63. Like Vegemite, you either love it or hate it.