Staying ahead of the game 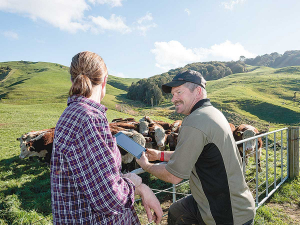 High-performing farmers are front-footing challenges facing the sheep and beef sector and adapting their businesses, according to new research by the Red Meat Profit Partnership (RMPP).

According to the study, consistency of execution, attention to detail and measuring and recording performance were all critical to driving performance on sheep and beef farms.

RMPP commissioned the study to ask a group of New Zealand’s highest performing sheep and beef farmers to identify the main drivers of their performance. This year’s research, which followed a similar study in 2015, identified the critical characteristics that enabled them to consistently achieve good results.

It also focused on what had changed for these farmers, particularly the challenges they were facing and how they were responding to the issues compared to five years ago.

The research found there was a stronger focus among high performing farmers on addressing environmental challenges through quality assurance programmes.

However, these farmers noted feeling that additional regulations had led to an increasingly negative public perception towards farming.

Many high performing farmers want to take ownership of this issue with some wishing to help show the public how they farm with integrity, especially regarding animal welfare and the environment.

Facing droughts, dealing with climate change, and the need to map pathways towards becoming carbon neutral were also more prominent issues compared to 2015.

Meanwhile, the farmers recognised the changing consumer preferences and what this meant for the long-term viability of their businesses. Covid-19 also presented a range of challenges and opportunities.

The research shows most high-performing farmers are continuing to do what they have already been successfully focusing on for many years.

“These farmers do not blindly follow trends, rather when they introduce new practices, they tweak them to suit both their style of farming and the environment they operate in.”

The research found that high-performing farmers, through a strong sense of self-awareness, are particularly good at translating their values or what’s important to them into a ‘style of farming’ that is profitable and sustainable for the environment they occupy.

It also suggests that a way to support other farmers to improve their performance is to first help them to understand what they value most in farming and then translate this into a plan that suits their circumstances.

“This may take some time and require facilitation and peer support. While each plan may be slightly different, measuring and recording performance should be universal and small steps adopted.”

Red Meat Profit Partnership (RMPP) Action Group facilitator John Stantiall was unsure, at the start of the Covid-19 lockdown, how meetings could work.

Farmer group is all action

At least 50% of New Zealand farmers identify succession planning as an issue for them, their family and their farm business.