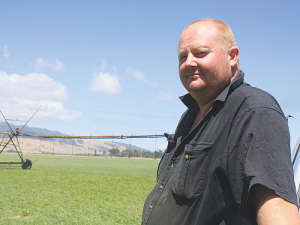 Brian Bosch (pictured), farming at Kahutara, was first to install the Precision VRI system 10 years ago.

Stu Bradbury and George Ricketts, were in 2004 staying on the South Wairarapa farm of Brian and Jo Bosch, living on site while they worked a summer job assembling irrigators in the area.

Bradbury, Ricketts and Brian Bosch talked about irrigation and some of the challenges on the Bosch’s farm: the existing pivot irrigation system was causing problems.

Says Bosch, “Where the pivot went over the races was wet and mucky, and when the cows walked along it to get to the cow shed it damaged the race.

“We were also getting lame cows that got wet feet and bruising on the muddy race.”

He says blanket irrigation was the problem.

“There had to be a way of irrigating parts of the farm that needed it, but also keeping vulnerable areas, such as the race, dry.”

Bradbury and Ricketts had mechanical engineering backgrounds and they considered how to solve the problem. At the time there was nothing on the market to achieve precision irrigation -- managing the water flow in targeted and controlled quantities to specific parts of a paddock or farm depending on topography and soil type.

“We saw wet areas where crops weren’t growing and dry areas where there wasn’t much water,” says Bradbury. “There was an obvious need to have a system to specify where you needed water and how much.”

But Ricketts soon suggested using technology to solve the problem. And in 2006 and 2007 they began developing the programming and prototype that would become the Precision VRI.

The technology involves first making an electromagnetic map of the land, measuring soil conductivity (soil type and the amount of water it holds) and then developing a programmable irrigation system where every nozzle can be individually controlled, allowing customised irrigation within a field.

Farmers can drive across their land with an electro-magnetic sensor and a real-time kenematic GPS, accurate to within 2cm, to map their land and use that information to programme the Precision VRI system.

The Bosch farm at Kahutara in November 2008 became the world’s first farm to install the Precision VRI system, and it is still running. He now milks 1000 cows, producing 400,000kg milk solids annually on 320ha.

Muddy areas around troughs and races are also no longer a problem and lame cows are no longer such a problem.

Land is more productive, and areas previously muddy can now be used for growing grass or crops. Places where tractors and heavy farm vehicles used to get stuck have dried out and are traversable.

Bosch says irrigation is “vital” to his farm and growing good pasture for his herd, to ensure productivity. “We’re huge fans of the Precision VRI.”

The system enables farmers to control water usage in a sustainable, smart way. It ensures that only the areas that need water, get water, and at the right levels. Individual nodes across the system can be programmed to specific levels, meaning areas of a paddock just metres apart receive different amounts of water.

Precision irrigation also helps conserve water, preventing excessive water waste on areas where it is not needed up to 30% across a farm in some cases.

In 2011 the company was bought by Lindsay Corporation. Bradbury and Ricketts are still on the team behind Precision VRI, working at Lindsay NZ.

A national water strategy and water storage facilities top the wish list of the country’s 3500 irrigators.

Water storage needed outside of Northland too — IrrigationNZ

IrrigationNZ wants the prioritisation of water storage in Northland extended to other dry regions.