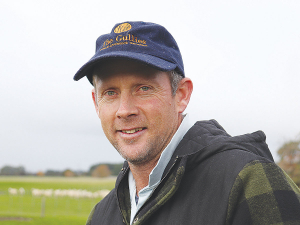 Richard Morrison says with Wiltshires there are big savings in wool related costs such as shearing and crutching.

His family were the first to commercialise Wiltshire sheep in this country.

The Wiltshire story in NZ started back in 1972, when a Wairarapa farmer bought some of the sheep into the country. However, before long he sold these to a farmer in the Bay of Plenty who, over a few years, bred up to almost 100 females.

In 1982, Morrison's grandfather and father purchased the flock and soon established a Wiltshire breed society. They bred up the flock into a commercial operation. He says the initial lambing percentage was 220% and the lambs were hardy.

For the Morrisons, the focus in the 1980s was the recognised value of the large, lean carcass of the breed.

They set up a joint venture with a meat company and supermarket to promote the quality cuts from the Wiltshire.

Other farmers also became involved, but they sold this business to focus on breeding.

Today, Richard Morrison has taken over the performance-recorded Wiltshire flock as part of a family succession plan. He says watching on at the field day and seeing the interest in a breed, that has been so much of his family's history, was special.

He says the Wiltshire has been very popular with lifestyle farmers, as well with mainstream farmers, and it's great to see these sheep now creating so much interest.

Morrison says it amazes him that so little research has been done on Wiltshires in terms of the sheep's shedding properties.

"I don't know how they are going to find the genes and that will be a challenge, but it's great to have some world-leading scientists and geneticists working on the project," he told Rural News. "It may be a single gene or it may be a combination of genes."

But Morrison says while the shedding gene is the main focus of the research, he points out that other forces come into play on farm. He says there is a heritable aspect to it and some sheep are more prone to shedding than others. He also believes there's a management and nutritional element to it as well.

"In really good conditions and when they are doing really well, that's when they will be more forward in their shedding, and they will be slower when the pressure on them," he adds.

Morrison says as a farmer there are big savings in wool related costs such as shearing and crutching. He says he spends less time chasing sheep around and spending time in a wool shed and more time doing other things - be that with the family or doing other jobs on the farm.

Aside of all the economic benefits of running Wiltshires, Morrison has a real soft spot for the breed.

He says they are quirky and intelligent and have their own personality. He says they also like their own space when lambing and don't like being disturbed. But he adds that they are good, strong mothers.

“But by their nature, they are not tied to a spot like a traditional Romney that might just park up and spend a week in the lambing spot. These guys will get up with their young and they are off again.”

Morrison says Wiltshires are very athletic animals and will jump fences cleanly, unlike some other breeds that are a bit clumsy at this activity.

“One person described them as ‘Perendales without the panic’ and I like that because it sums up their nature perfectly.”

The interest in the self-shedding Wiltshire sheep has prompted Massey University to run a special field day at their Riverside farm near Masterton on 1 June.