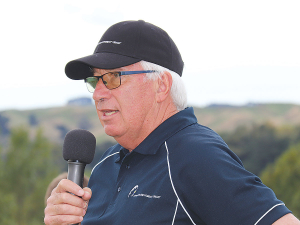 Peter Burke continues his series on the finalists and reports on the recent field day at Gwavas Station.

Owned by the Te Awahohonu Forest Trust, Gwavas Station is essentially a finishing farm in Central Hawkes Bay and takes stock bred on the hills from its sister farm Tarawera Station on the Napier-Taupo road.

The property is 1000ha and the trust leases 178ha more adjoining land, combining to provide an effective farming area of 989ha. The farm winters nearly 12,000 stock units -- 50% cattle and 50% sheep. Between 14,000 and 16,000 lambs and about 800 cattle are finished annually depending on the season. The land is flat to rolling and on the farm tour, which was part of the field day, visitors took in magnificent sights of the district from the high points on the farm.

Bob Cottrell, chair of the board of Gwavas Station, is a highly-respected farmer and consultant. He has spent much of his lifetime in the primary sector working on and with Māori farming enterprises. He says Te Awahohonu Forest Trust bought Gwavas in 2011 with the goal of gaining better access to the value chain.

The property is managed as a farm in its own right, but Cottrell notes that it is inextricably tied to Tarawera station as well. “When we developed Tarawera Station we started to put emphasis on productivity and our lambing percentage rose significantly,” he explains.

“We then realised that in order to retain a high performing ewe flock we needed to sell a lot of store lambs so purchasing a finishing block for those store lambs was critical for us,” he says.

Tarawera Station won the Ahuwhenua Trophy in 2013, but Cottrell says the reason for entering Gwavas is because it is a different farm. They felt that there was a story to be told about developing a finishing property out of a farm that was a nice property but was under-developed for what the trust wanted it for.

“It was partly to support the competition and partly to have it audited by people to see whether we were on the right track with our strategy,” he says.

Cottrell says the Ahuwhenua Trophy is an amazing competition and acknowledges that this year in particular it’s a very close race between the three finalists. He says he wouldn’t like to be a judge because it would be very hard to determine the winner.

Cottrell believes the competition itself has raised the profile of Māori agribusiness and says there is a greater interest from financial institutions towards Māori.

“What I have noticed, since I was first involved in the competition back in 2003-04, is a quantum leap in the support services such as banks supporting Māori agribusiness to develop,” he says. “There has also been a quantum leap in other Māori entities following other successful models to lift their performance. I think the competition is amazing and while we are all competitive and like to win we are all supportive of Māori development right across the board.”

Back on their land

A special feature of the Gwavas field day was the presence on the day of a descendant of the original Māori owners of the land – Brian Morris.

Morris’ hapū is Ngāti Marau and he says before the land was settled it was a totara forest and for Māori it was a place where his people used to travel through on their way north or south. He was one of the main speakers at Pōwhiri and talked about the significance of Gwavas now being in Māori ownership.

He says in the mid-1800s the land was sold to the Crown and was then on-sold by it to settlers and the large blocks became huge sheep runs. The family who bought the land 150 years ago have retained a small part of Gwavas station and still live there in one of the homesteads.

But for Morris and his whānau, the fact that Gwavas station has come back into Māori ownership is great news.

“This is special for us because we can come back on our land and establish a relationship with Te Awahohonu Forest Trust and rekindle our connections with the land. It’s just great to be a part of this event today,” he says.