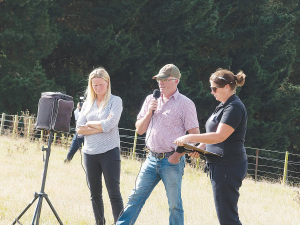 Geoff and Joy Hayward, with BLNZ facilitator Laura Lake, explain how they manage their Mt Horrible farm in the hills overlooking Timaru.

Farming is a three-generation family affair for the Haywards of Mt Horrible, near Timaru.

The business, run by Geoff and Joy Hayward, is a comprehensive sheep, beef and cropping operation. Their farming operation totals 1700ha across several blocks and a variety of soil types, topography, elevation and climates.

The Haywards recently hosted an open day for attendees of the Beef + Lamb NZ annual meeting.

Geoff explained that his parents, Donald and Judy Hayward, bought the original 300ha Mt Horrible farm in 1984 when they moved from Duvauchelle on Banks Peninsula.

Geoff and Joy joined them in 1994 and progressively took over, buying and leasing further land as it became available. Their sons Joseph and Jack – and Joseph’s wife Taylor – now also work the property, while Donald and Judy remain active, Donald running the business’s senior bull farm up to last year and still busying himself with maintenance.

Geoff concentrates on the cropping side of the business while Joy is in charge of the livestock. It is a complex business juggling the changing demands and deciding what goes where.

“There’s a bit of negotiation goes on at times,” Geoff grins.

With attendees of the open day gathered on an open paddock high on the slopes of Mt Horrible, the view is of Timaru in the distance and the Pacific Ocean horizon beyond.

Geoff explains that the main Mt Horrible farm lies on the slopes of an extinct volcano, with a lot of volcanic rock in the soil – a Claremont silt loam which he says is P-retentive and holds a lot of water but takes a lot to get wet again if it dries out.

A 100ha cropping blocks is visible on the Pareora River flats, in the middle distance.

The block is in five 20ha paddocks “so it’s grass seed, barley, barley, wheat, then a break crop which is usually peas or pak choi”.

“There’s lambs down there at the moment and there’ll be bulls over the winter.”

While his father usually only put one paddock into barley, Geoff says he enjoys cropping and would usually do about 550ha, mainly cereals and “a wee bit of grass seeds” where it fits.

The farm works a minimum tillage regime with direct drilling where possible; the rule of thumb is 40 minutes and 30 litres of diesel per hectare to get crops in.

This season had been “average” because of the half a metre of rain between November and Christmas which decimated the crops.

However, they were now enjoying a favourable autumn and expected to get about 80ha of new pasture sown “and that can really drive the farm in following years,” he said.

On the livestock side, Joy is now running 2500 ewes and 260 Friesian bulls.

With the open day attendees gathered at the sheep yards, she points out a large mob of what she calls her “good ewes”, with ear tags showing that many are 5,6,7, or 8 years old. “God help me, there’s one or two that are 10.”

She explains that she has bred for a fat sheep that milks really well.

“To me it’s just about feed, feed, feed and having fat sheep.”

“Sheep are all about body size and milking ability because this farm is run on getting numbers away at weaning.”

The mob is mated to ANZCO-specific Longdown terminal sires, to produce lambs especially for the high-end British supermarket chain Waitrose.

They boast a very high scanning and lambing percentage, which means many sets of triplets.

Joy explains that she takes one triplet away from the ewes, especially the older ones, and puts them on an automatic lamb feeder that’s “just brilliant.”

The feeder automatically weighs out powder and mixes it with water as required so the milk is always fresh and warm.

With a lot of feed now on the farm Joy also expects to buy in up to 4000 store lambs for this winter.

Joy says her only animal health issue is “old age.”

She doesn’t put a number on the ewes’ BCS but drafts them by eye into fat, medium, and “needs work.” Separated into small mobs and fed accordingly, they do well and pick themselves up, she says.

She has calculated that it cost about $80 to rear a lamb but has worked out ways to reduce that for next season.

“It’s definitely worth it, and ethically we can’t do anything other than rear our lambs. I will not leave a lamb to die.”

For the future of Mt Horrible, Geoff Hayward says there’s always fine tuning of the timing of the various productive streams.”

Some days it can be

Mt Horrible got its name, the story goes, from early European surveyors who had finally got back to town after a hard day in the hills.

“One asked the other what kind of day he’d had, and they named it accordingly,” explains Geoff Hayward.

The BLNZ farm visit took place on a pleasant autumn afternoon when the farm had been in sunshine all day, but there had been thick early fog low down around Timaru. There are days when it can be the other way around, Hayward says.

“We can be sitting in fog for days up here. We also get a pretty substantial rainfall. If Timaru gets 20mm in the southeasterly we get 80mm,” he adds.

“It can be pretty bleak at times.”