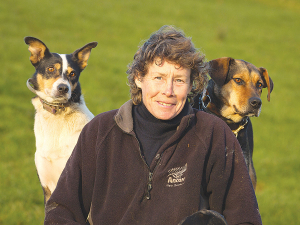 A farmer collective breeding for parasite resistant genetics claim they are leading the pack as drench resistance becomes more prevalent and drench failure is reported NZ-wide.

The aim of their breeding programme – verified by Sheep Improvement Ltd (SIL) – is to strengthen flocks and save farmers time and money by reducing the number of times flocks need to be drenched.

As a group, they work to improve parasite resistant stock genetics and educate farmers about the value of including parasite résistance in stock selection decisions.

Kate Broadbent, a founder of WormFEC Gold, whose flock of Nikau Coopworth is in Waikaretu Valley, says long established parasite resistant genetics in her flock mean drench has not been used on ewes since 2002.

“The advantage of not using drench on ewes is a significant time and labour saving. As well as not having to pay for drench it also provides significant refugia, helping avoid drench resistance,” Broadbent said.

Her farm isn’t organic and where necessary she will drench lambs. But she is committed to “responsible use of the drench families to prolong their working life”.

Leigh, who is also a Wormwise facilitator, has been buying stock bred for parasite resistance from Broadbent for ten years and from Nikau Coopworth’s former owners before that.

“Nationwide there are reports that up to 30% of FECRTs (faecal egg count reduction tests) in sheep are showing triple drench resistance,” Leigh said.

“Often farmers don’t notice as they aren’t monitoring for it regularly. But’s a huge cause for concern.”

When Leigh is buying rams, parasite resistance is one of three or four main traits he considers. As the facial eczema tolerance genetics are present in the stud, he can focus on stock with good production figures and good feet.

“Factoring parasite resilience into stock purchasing decisions is vital as we wish to maintain drench efficacy with robust stock that don’t require regular drenching. Drenches are a finite resource and so we want a flock which is productive but sustainable and which will save money and time in the long run.”

Another WormFEC Gold member, Nelson stud owner Peter Moore, of Moutere Downs, says concerns about the potential of drench resistance led him to begin breeding for parasite resistance 20 years ago.

“A lot of people have buried their heads in the sand hoping drench resistance would go away,” he said. “But it showed up on our property very early because our sheep graze on multiple farms, so we were forced to take action.”

Moore estimates they are saving at least $6000 annually by not having to buy as much drench.

With increasing economic pressure and talk of a global slowdown, reducing on farm costs is essential.

The Sainsbury’s FECPAKG2 Project (2014 - 2017) showed the average NZ sheep farmer producing 5000 lambs potentially loses up to $75,000 annually due to reduced lamb growth rates by using a drench that does not work.

Collectively, WormFEC Gold members have taken over 65,000 FEC samples, with an average of 300 FEC samples each per year. Members work closely with Techion, providers of the PhenR and WormFEC service, and with AgResearch which set up WormFEC in 1994 and provides science guidance to the group.