Farm planning at the core 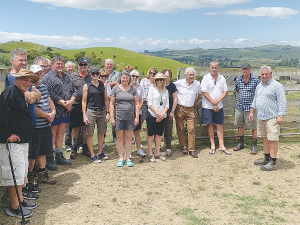 The group is made up of nine Waikato farms, which are all part of the local Mangatangi catchment.

"There's no hanging round with this group," says Red Meat Profit Partnership Action Group facilitator Rob Macnab. "They know what they want to do and out role is to help make that happen."

The group is made up of nine Waikato farm businesses, which are all part of the Mangatangi catchment - part of the Waikato River/Whangamarino Wetland catchment. The members originally met at a risk mitigation workshop, held at a Maramarua farm, where representatives from Waikato Regional Council outlined environmental requirements for the Waikato region, particularly around waterways.

They went on to create an informal group to provide mutual support in the work that needed to be done. However, they recognised a more formal structure was needed, so in August 2020 they transitioned to become a RMPP Action Group.

The Action Network model supports small groups of seven to nine farm businesses to work together to explore ideas and share expert resources, to help them make positive changes on-farm. Kick-start funding of $2,000 per farm business is pooled to fund facilitation and expertise.

The group held its first meeting as an Action Group in September and work is now well underway towards developing individual farm environment plans for each business, as well as an overall subcatchment plan.

Their ultimate goal is to share what they learn, to help other farmers within their catchment develop their own farm environment plans.

McNab is a farmer and a director and consultant with Total Ag. His background includes both working in the fertiliser sector and as a farm finance manager with Rabobank. He currently facilitates six RMPP Action Groups.

"This group is taking the work at a sprint," he says. "They have made very rapid strides. Their goals are to continue to be profitable farm businesses while having positive outcomes around soil, water, biodiversity and climate change."

In its first two meetings the group refined their goals and developed the first cut of their sub-catchment plan. Next they started developing their farm environment plans with the aim for them all to be completed by the end of March 2021.

As well as using the in-house skills of Total Ag, particularly around farm environment plans, the group has brought in a number of subject matter experts.

“So far, we’ve had a sub catchment planning expert, with experience of getting groups of farmers to communicate and verbalise what they want out of the environment,” McNabb says. “We are also looking to bring in expertise around biodiversity and farm greenhouse gas emissions.”

Group members Robyn Budd and Hamish Browne farm organic beef on 106ha Black Pond Farm at Mangatangi. They bought the farm three years ago to convert it to organic farming and set about an extensive land restoration programme. This has included planting thousands of native trees to provide shade and help stop erosion and sediment from entering waterways.

“Having created an informal catchment group and held a couple of meetings, our group realised we were a bit stuck around how to get to the next level in terms of developing the systems and paperwork required to apply for funding,” says Budd.

“To access the funding and support available, we needed to be more than just a group with good intentions.”

She says the RMPP funding makes it possible to bring in other subject matter experts.

“There is no way that, individually, we could have found the funds to access this kind of facilitation and expertise.”

Browne adds that McNab also plays a vital role in keeping members up to date regarding regulatory change.

“He simplifies everything in the process down to a working level. There are so many rules and regulations and they keep changing. He makes sure we are working to the latest requirements.”

Fellow group member Will Murphy, who farms Friesian and beef bulls on 350ha at Maramarua, said there was already a lot of knowledge in the group but the Action Group model would help simplify the work members needed to do.

“We are all in the same boat together. We are not being judged on water quality on a farm by farm basis but on a sub catchment basis, so we are all working together, to help out each other and the wider farming community.”

Browne says the group is also really looking forward to sharing the knowledge they are gaining more widely.