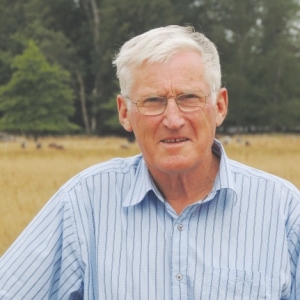 Whatever it takes, don’t disrupt your capital stock to cope with the drought. That’s the headline message from a seasoned Canterbury consultant who’s seen the region go through severely dry seasons in over 40 years in the industry.

“As soon as you disrupt your capital stock, when the rain and recovery comes you will be hit somewhere and you’re going to compromise your cashflow for more than just the drought year,” stresses Peter Clarke, Geraldine.

Feeding capital stock, by buying feed, or sending them away to grazing, will not be cheap in a drought, he acknowledges, but it will be less than the cost to the business of selling capital stock in a drought-depressed market and having to replace them at high prices when the drought passes. It’s also highly likely income will be foregone in the interim.

If sheep and beef farmers have taken on dairy grazers, they should consider them as capital stock too, he says.

“You have a contract and you won’t be getting 18c/kgDM out of any other class of stock at the moment. Put the lambs off to keep the heifers on.”

So, having bitten the bullet to keep the capital stock – replacement heifers, hoggets and two-tooths included – what do you feed them?

Clarke says that comes down to what’s the cheapest feed available in cents per megajoule of ME that will meet the needs of the stock class. In most years that’s homegrown feed, usually pasture or perhaps a forage crop or two during summer and autumn, moving onto feed crops in winter. How much of those winter feed crops will be available this year remains to be seen.

Where moisture was conserved by spraying off, fallowing and spraying again before sowing, they established well and will recover if rain comes soon. Where corners were cut and/or moisture lost in cultivation, there are “disasters”. “In some years they will get away with it but this year they’ve taken a hiding.”

With conserved feed typically costing at least three times crop fed in situ, even in a normal year, replacing that shortfall from winter crops won’t be cheap.

Regardless of winter crops, Clarke says as a rule of thumb dryland sheep and beef farms in the South Canterbury region should carry a reserve of fine chop pit or stack silage adequate to feed all capital stock for 100 days in summer and/or autumn should it get dry.

While baleage is a popular option for its convenience, and may be the only option for those buying feed in now, it’s not the best way to build those reserves. “Baleage should be illegal. It’s far too costly.”

Also, when large amounts of supplement have to be fed, such as in a drought or snow, feeding baleage is much more time consuming than filling a feeder wagon with fine chop silage.

In practice in January that meant quitting store cattle ahead of lambs as prices for the former remained relatively firm while lambs, stores in particular, crashed.

With dairy grazers, heifer calves need to be on good quality feed but R1 heifers, if they were ahead of target at Christmas, “can become cows”, grazing rougher pasture and scrub if need be. Supplementing with PKE is also an option. For the calves, summer feed crops should have been planted to provide quality feed and reduce reliance on drought prone pasture.

Clarke says he stresses to all his sheep and beef clients with dairy grazers the importance of an “ahead of target by Christmas” policy to build flexibility in summer, and in a year like this, it really pays. As a difficult stock class to manage they should also never be more than a third of the stock units carried, he believes.

“Heifers are a lot like bull beef. They’re risky and in years like this you get your come-uppance for taking that risk. That’s not a criticism. It’s just the way it is.”

Clarke stresses there is no one recipe for dealing with the drought and plans have to be made to match the farm, stock and feed availability. The bottom line is droughts always reduce income and increase cost and how big that impact will be has often been determined by policy and choices made long before the dry set in.

Not a ‘super’ drought yet

Clarke says the current drought is “very bad” but hasn’t been going long enough yet to be classed a ‘super drought’ such as 1988 or 1969.

“For most people it’s only got really serious since late November because there was a lot of moisture in the soil coming out of winter, though on light ground it would have been felt earlier.”

In contrast, in the infamous 1969 drought, a dry summer and autumn was followed by a winter without enough rain to replenish soil reserves so there was little or no spring flush, he points out.

“That was the first year I was farming. We had seven inches [of rain] in ten months. It was fearsome.”

The current drought is widespread and includes many normally rain-reliable areas along the foothills. Some are “still green but not growing much.” Others are already brown and won’t recover for weeks even after rain arrives.