Better way of life pays off for kiwifruit growers 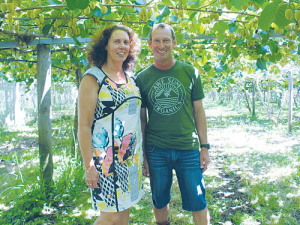 Ten years ago the Whites set out to find a better lifestyle for their family away from the city; they found it on a bare block near Opotiki.

Their work and passion have transformed part of an organic dairy farm into the successful 5.85ha orchard it is today, the awards judges said.

“The concept of kaitiaki – acting as a guardian, protector and conserver – is evident in all aspects of the Coastal Kiwis orchard business.”

The judges said the Whites did not compromise: being organic was not a barrier to excellent productivity in the orchard.

“Organics is a licence to do things differently. Every opportunity is taken to try to learn new things by observation and open mindedness.”

Catriona’s parents had offered the couple the chance to buy part of their organic dairy farm near Opotiki to develop as a kiwifruit orchard.

“My family has been farming this land four generations and our children (Letisha, 14, and Lochlan, 13) are the fifth generation to live here. For most of that time the land has been farmed using organic principles,” Catriona says.

Although they initially didn’t know much about kiwifruit, they did most of the physical development work themselves, keeping costs down and learning by their mistakes. Mark also did a National Certificate in Horticulture.

The orchard had 3.19ha of Zespri Organic Green kiwifruit, producing a total of 23,483 trays of kiwi-start fruit in 2017.  Zespri Organic SunGold (G3) is now grown on 2.65ha producing 38,362 trays -- this in a “challenging growing year” with cyclones and a wet, windy autumn.

Recently developed blocks of SunGold are set to produce in the next season. Initially the Whites grafted Hayward Green and Hort16A gold kiwifruit onto Bruno rootstock. They decided to remove the gold vines when they saw the devastation caused by the vine disease Psa-V. Organic passionfruit produced income until the newly grafted G3 vines began producing.

A small flock of certified organic sheep eat the weeds on the edges of the orchard, helping reduce tractor work and its soil compaction, especially in winter.

Organic sprays are used as required to disrupt pest life-cycles. And unpaid ‘pest experts’ work in the orchard: weka and fantails prey on insects, bird seed plants are grown to encourage birds away from eating kiwifruit flower buds, and slugs help to recycle organic material on the floor of the orchard.

“With plenty for the slugs to eat on the ground, they don’t bother to chew on the newly grafted vines. It’s a matter of finding the point at which everything can live in balance,” Mark says.

He is active in the Tablelands Irrigation Scheme. Water use is carefully planned and monitored.

The Whites were presented with the Bay of Plenty regional supreme award at a dinner on February 23 at the ASB Baypark Arena, Mt Maunganui. They also won the Bay of Plenty Regional Council Award, Zespri Kiwifruit Orchard Award and the WaterForce Integrated Management Award.

The Ballance Farm Environment Awards recognises and celebrates good farm practices which promotes sustainable land management through an annual awards programme which is now run in 11 regions throughout New Zealand. More information about the awards is also available on www.bfea.org.nz