Wraps to be pulled off new Magnum 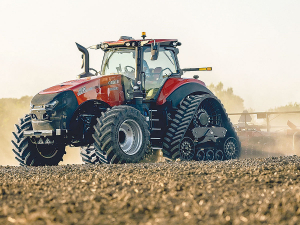 It might be a while before New Zealand sees Case IH’s new AFS Connect Magnums, but they were on show at the Farm Progress Show last week in the US and at AgQuip in Australia.

In common with other models in the range, the new tractor has a redesigned cab, new AFS Vision Pro operating system, AFS Pro 1200 display and automated brake assisted steering.

But the new flagship Magnum 400 model differs in the engine and transmission. Firstly, the 8.7L six-cylinder FPT Cursor 9 is the same as that used in the Magnum 380 CVX, which also peaks at 435hp. But the rated power is up from 380hp to 400hp.

Until now, the biggest Magnum models could only be specified with a stepless CVX box, but the new 400 has an upgraded 21F x 5R powershift meaning more ratios over the 19F/4R powershift used in the smaller models.

The company says the new transmission puts down a constant 435hp at peak to the ground with a 10% power growth in both wheeled and Rowtrac configurations. Also, the set-up offers lower speeds in first gear and the wheeled tractor reaches its maximum speed of 50km/h at a reduced engine speed.

A new cabin, with pillarless full-width glass doors has improved seating, heating and cooling and more storage space. As one would expect, charging points, USB sockets and data ports are the norm, as is the can’t-do-without cup holders.

A new multi function armrest/control lever has better ergonomics and eight configurable hot keys for any machine function in a favoured position. This ability is carried over to the hydraulic remote valves.

In the tech arena, the Vision Pro operating system now has a new interface display.

This includes new graphics for the mapping function based on an Android operating system and photo-realistic images for the tractor and implement.

Other interesting additions to the series include electronic telescoping rear view mirrors, tyre pressure monitoring via the AFS Pro 1200 display and a semi-active cab suspension option.

Case IH owners will now able to make more informed farm management decisions – based on both real-time and historic data generated by their machines.

Case has big bales all squared-up

Farmers and contractors seeking to pack more material into every bale are offered a new way to to reduce handling requirements and transport costs.