Tractor of the future? 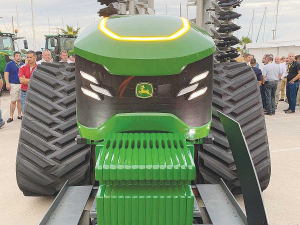 John Deere looks to be heading towards autonomous tractors.

And though global entity John Deere has been a little slow off the mark, it put this right at a recent dealer event in Valencia Spain, showing attendees a new concept perhaps suggesting its direction.

Its cab-less tractor will have a rated electrical output of about 680hp with zero emissions. But there is so far no information on the exact specifications of the powertrain, although it was displayed with tractors and lacked any visible steering mechanisms.

The tractor contrasted with another concept, shown last year, which had a more conventional layout. It has a front-mounted cable drum and outrigger arm that carries 1000m of extension cable to deliver power to the all-electric 110kW power train.

The latest concept was shown with a conventional three-point linkage, carrying a semi-mounted disc cultivator and seeding unit.

John Deere has launched its next generation of self-propelled sprayers.