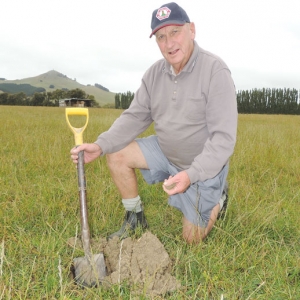 Luck of the draw won’t come into it when the 32 competitors in this year’s New Zealand Ploughing Championships put steel to soil next month, says the host farmer.

Plots for the New Zealand Ploughing Association’s 60th national championship will, as is the tradition, be drawn on the Friday before the competition begins on stubble on Saturday.

“The draw’s fairly important to the contestants,” acknowledges Noel Sheat, whose family property Harpsdale Farm, Palmerston, is hosting the event.

“But there’ll be no ‘luck in the draw’ here. It’s a very even paddock. Even I couldn’t say which end would plough the best.”

And Sheat should know. He started competition ploughing in 1965 and while he doesn’t compete these days, he won the nationals once, was runner-up three times, and ploughed at World Championships in Germany, Ireland, Zimbabwe and Canada.

And all his life he has farmed the 400ha mixed crop and stock farm which straddles the Shag River. The house and yards are to the east of the river, but the competition site is on flats to the west. The soil is deep and free-draining.

“In the middle of last winter when it was so wet everywhere else we could have ploughed those two paddocks,” notes Sheat’s son Ronald, who with grandson Craig now runs the farm.

He jokes he’s “grounds convenor” for the event which besides conventional and reversible (see panel) championships includes vintage and horse ploughing contests.

“He’s also a reserve judge, but he doesn’t know that yet,” retorts Noel.

A host of other attractions are scheduled for the 40ha site over the weekend so while the ploughmen are focussed on their furrows spectators can enjoy displays of classic cars, motor homes, arts and crafts, tractor dancing, and vintage army equipment from HQ 44 South Vintage Military Collectors Club.

“They want to do a battle re-enactment,” says Noel.

“Just so long as they don’t blow up the [farm] bridge,” adds Ronald.

The tractor ‘dancing’ involves a fleet of H- or M-series tractors – “the ones with the wheels close together at the front so they can turn very tightly” – from West Otago Vintage Club putting their machines through some complicated, co-ordinated manoeuvres.

A working vintage machinery display and rally will also be held.

The entertainment for the public is scheduled for the Saturday (stubble) and Sunday (grass) championship days, but the ploughmen will be on site Tuesday and Wednesday for official practice before embarking on a tour of the region on Thursday and the drawing of plots and a mayoral welcome on Friday.

“There will be a few speeches made regarding the fact it’s the 60th contest.”

The organisers are hoping to have Jim Brooker, Kirwee, there celebrate the occasion with them.

“He’s the only contestant from that first one left and he actually won it.”

Brooker qualified for the world championships with that win, becoming the first New Zealand representative in world ploughing. Sheat notes how things have changed since then.

“When he went overseas it was just him, and International Harvester provided him with a tractor and a plough when he got there. Nowadays we send two ploughmen (the conventional and reversible class winners), coaches, a manager and a board member. The ploughmen often send their ploughs and tractors too.”

Ploughing with a reversible may be easier in the paddock because you can just blast up and down with no need to work in lands, but when it comes to competition ploughing, “it’s murder, definitely much harder than conventional,” says Sheat.

“It’s a bit like going out to the field and working with two different ploughs but you have to make it all look the same.”

Some 95% of new ploughs sold globally are now reversible so competition ploughing as a sport “had to go along with it,” and include a reversible class, he adds.

While conventional ploughmen have 100m x 20m parallel plots to work, reversible exponents turn over a wedge 16m wide at one end, and 24m wide at the other, so there is a series of butts to deal with. At the finish no land should be left unploughed or reploughed and only one wheel mark left along the length of the plot.

“It’s a big learning curve for the contestants who go reversible,” says Sheat.

Both reversible and conventional competitors have 20 minutes for the opening furrow or split, then an hour break while these key elements are judged, before ploughing resumes for a maximum of 2 hours 40 minutes to finish the plot.

See www.worldploughing.org for the full rules.