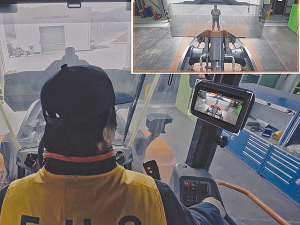 The Doosan system allows operators to "see" blind spots ahead of the bucket, with the view displayed on the in-cab monitor.

Doosan Europe has addressed this issue by developing a novel "transparent bucket system" for its loaders, which could certainly have a place in the agricultural sector to help reduce accident risk.

The system allows operators to "see" blind spots ahead of the bucket, with the view displayed on the in-cab monitor.

The system works by using upper and lower, front-focused cameras.

The views from which are combined to display an image using a curved projection mode.

In the addition to safety, the company also suggests that the system will lead to better operational efficiencies. This is because i provides a forward view when loading and unloading, carrying loose aggregates, soil or sand and "seeing: over the side of vehicles being unloaded.

Believed to be the first of its type, Doosan has applied for patents in Europe, North America, Korea and China. The company's idea is to complement other systems such as Around View Monitors (AVM) to indicate hazards around the machine periphery and rear ultrasonic obstacle warning sensors.