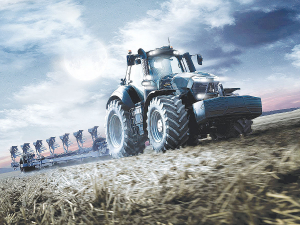 Deutz-Fahr's fourth generation of high horsepower, professional series tractors are being released to international markets, with arrival in New Zealand scheduled for the second half of 2022 or early 2023.

The flagship 8280 TTV has already reached our shores and gives an insight to where the German-built tractor range is heading. The latest Series 6 will be offered with the TTV constant variable transmission or the RC 6-stage Powershift gearbox options, covering a range from 170 to 230hp.

Key to the new fourth generation tractors is the design and production of SDF’s own in-house built TTV transmission. Said to be more efficient in transferring power from the engine to the ground – and proving to be more fuel efficient – the transmission will feature in several models across the 6-cylinder range.

While retaining the same operating systems as existing models, the internal make-up differs by using a combination of a stepped planetary gearbox, clutch unit and two hydrostatic units, with two automatically-shifted drive ratios.

In the first drive ratio, the tractor can start up, reverse or remain stationary, with the stepped planetary transmission splitting the input from the engine into a mechanical component and a variable, hydrostatic component. As the tractor accelerates, the rotational speeds of the two clutch shafts match, at which point the drive ratio changes automatically.

The change between drive ratios ensures consistently high efficiency at all speeds. Depending on ground speed, the twin-hydrostatic units operate as a hydraulic motor or hydraulic pump, seamlessly providing infinite speeds from 0 to 60km/h.

A key point of difference sees the engines using the latest design technologies but homologated as a tier 3a compliant variant for the Australasian market. This removes the need for the after-treatment upgrades of AdBlue and DPF systems to meet the Stage V regulations. This all means more efficient burning of fuel and the added benefit of being able to run out to 1,000-hour oil change intervals.

Other features include the ability to specify an exhaust brake to any tractor running either a pneumatic cab suspension or air braking. In addition, if the tractor is fitted with the optional E-Visco engine fan, this will activate to 100%, absorbing 8.5kW of power.

The professional series tractors will be promoted under the Warrior brand name. This will differentiate them from the broader product offering. The points of difference include a black colour scheme, stainless exhaust shield, LED lighting packages – including illuminated push button panels – additional Warrior decals and a Hydraulic Rear Walterscheid Top link.