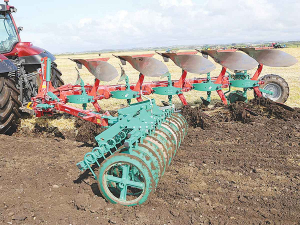 Kverneland’s history dates back 140 years, when its first ploughs were made in Klepp, Norway. Ploughs have remained a key focus of the business.

They will have many of the features first seen in the clever I-Plough launched in 2015, including the swept leg design, centralised skimmer adjustment and a new leaf spring design for the auto-reset system.

The new series will be sold alongside existing ranges and the older ranges will eventually be phased out.

Headstocks for the mounted models use the same configuration as the I-Plough. This allows them to follow like a trailer when carried on its land wheel during transport. All new models can be optioned with Variomat manual or hydraulic variable furrow width adjustment which now has top and bottom rails to the side of the main beam.

Depending on model, the furrow width can be adjusted between 30 to 55cm. The front furrow and draft links are synchronised automatically.

Both series can be fitted with a packer arm or integrated Packomat press. The company notes that when ploughs are ordered for manufacture with the optional packer system, the headstock construction is manufactured from higher grade, close grain steel.

The new 6500S series also has many of the changes seen in the mounted ranges, and includes Cat 3/4 compatible headstocks and a larger 480-80R24 rear wheel.

Stocking up on parts

Power Farming says it now stocks an extra $500,000 of parts at its hubs in Christchurch and Invercargill to help cut contractors’ downtime in the South Island.