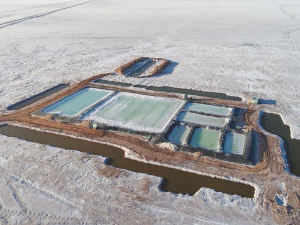 Australia’s Lake Mackay is said to cover anarea of 3500 square kilometres – making it the largest, undeveloped sulphate of potash bearing sale lake in the world.

The topic of shipping fertiliser around the world, brings with it environmental and socio-economic issues — but that may soon change.

To see the issues, just look at what is currently facing Ravensdown regarding the sourcing of phosphate from the Western Sahara.

In the case of Potash, the main producers are Canada, Russia and Belorussia, which cumulatively account for two thirds of the world’s production.

However, in the future, it looks likely that those figures might change. New Zealand will likely source its supply of K from closer to home – when production from Australia comes on stream.

Lake Mackay, in the big country’s Northern Territory and Western Australia areas, is said to cover an area of 3,500 square kilometres – making it the largest, undeveloped sulphate of potash bearing salt lake in the world.

Experts suggest that once developed, Lake Mackay will allow Australia to move from a position that sees it import 100% of its potash requirements, to one of the most globally significant producers and exporters.

Lake Mackay’s brine-hosted potash deposits are different from hard rock deposits, in that the groundwater may be recharged over time, where rock-based residues are eventually mined out. Ninety per cent of all potash production in the world is Muriate of Potash (MOP), which contains 46% chloride.

Lake Mackay’s Sulphate of Potash (SOP) and Sulphate of Potash Magnesia (SOPM) are premium chloride-free forms of potash fertilizer, which is increasingly being used for advanced farming practices to minimize agricultural pollution and water usage.

During production, the extraction of potassium-rich brine is achieved via a shallow trench system. As one might expect of such a vast area, the trenches and feed channels will have a length of 550km, an average depth of 4.5 metres and result in 8.5 million cubic metres of material being excavated.

Brine will flow along the trenches and feed into solar evaporation ponds the will eventually cover 34 square kilometres at start up.

As one would expect in such a remote location, the excavation of these trenches and canals – plus the establishment of the evaporation ponds – is no simple task. The upper crust of the lake is only 50cms thick, with a semi-fluid layer beneath. These physical properties require the use of amphibious excavators, designed and manufactured in Finland, while also dealing with the intense heat of WA – in an environment that is ten times saltier than seawater.

A feasibility study completed in 2018, estimates that Lake Mackay’s SOP production rate will be around 426,000 tonnes during the first 20 years. This is double Australia’s current annual consumption.

Dr Jacqueline Rowarth analyses the points made at this year's Fertiliser and Lime Research Centre workshop.

For the past decade, European fertiliser spreader manufacturer Sulky has been offering Fertitest, a service designed to assist with the configuration and effective use of the brand’s spreaders.