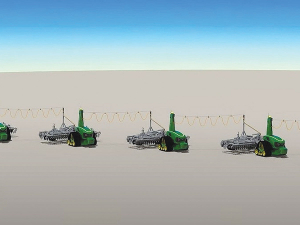 While there is still a major reliance on diesel engines, global tractor manufacturer John Deere is paying close attention to the electric route.

The GridCon concept, first shown in January 2019 and later that same year at the Agritechnica Event, takes power from an oversized 1,000 metre extension lead. This is capable of delivering 2.5kW/300kW and managed by a reeler system as the tractor moves up and down the paddock.

GridCon 2 takes things a stage further, featuring a cable reeler extended to 3,000 metres and offer a maximum delivery of 8kV/1,000kW. The key difference is the ability to simultaneously power up to five autonomous tractor/implement combinations via an overhead supply line. The “swarm” concept is nothing new to John Deere. However, the rapid evolution from the realms of science fiction to machines in the field, begs one to ask whether this type of technology is ready to be adopted by large scale farmers or contractors.

Likewise, the complexity of dragging power cables around a paddock – in this case 3,000 metres of cable – also begs the question, did JD miss the mark altogether and should it be looking at rapidly evolving technologies targeted at the green evolution, such as hydrogen?