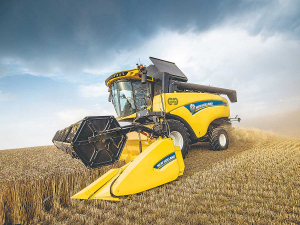 New Holland claims its new hybrid CH 7.70 can deliver up to 25% more output than a conventional CX equivalent.

New Holland has entered the world of hybrid headers, launching a new machine that blends its conventional threshing drum and twin-rotor separation technologies.

The CH (Crossover Harvesting) 7.70, claimed by NH to be fitting in between its CX and flagship CR ranges, is aimed at those looking for high daily outputs, with reduced maintenance costs.

The machine is claimed to deliver up to 25% more output than a conventional CX equivalent. The two drum, threshing system features a 600mm main drum that works in conjunction with a sectional concave element. The layout incorporates the NH Opti-Thresh system that adapts to changing conditions by repositioning the rear part of the concave.

At the rear, twin 21-inch diameter, 3.45-metre long rotors offer 2.9 square metres of separation area. This in turn feeds the Triple Clean cascaded cleaning system, featuring an additional step, which is said to increase capacity by around 15%. Meanwhile, a double flight cross auger layout transfers grain to the elevator feeder.

On slopes, the SmartDrive sieve system offers automatic compensation at angles of up to 25 degrees on side slopes. The calibrating of the sieve action is based on forward speed and grain size to determine the optimal throwing angle.

For sustained hilly conditions, the dedicated “Laterale” version can deal with transversal slope corrections of up to 18 degrees on both sides.

Power is provided by an FPT Cursor 9 engine delivering 374hp. This is up 34hp on the conventional CX6.90, meeting Stage V emission regulations using SCR technology.

Header choices include VariFeed units up to 9.15 metre working width, with an 8.53 metre model developed especially for the CH7.70

Initially destined for the European harvests from July 2020, global markets will follow later in the year.

New Holland Agriculture has upgraded its telehandler offering with new naming and livery.

New Holland Agriculture has upgraded its telehandler offering, with new naming and livery, with the latter said to integrate the range into the NH harvesting family.