Grease is the word 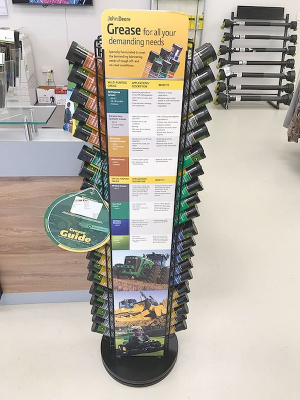 Grease keeps the wheels of agriculture turning – probably for longer than we realise.

The Egyptians used a lubricant made from limes with olive oil. In the 19th century, soap was added to oil as a thickener, effectively making grease as we know it today. And in an agricultural slant in Sweden, black slugs (Arion ater) were used as axle grease on the wooden shafts of farm carts.

Many greases today have emulsifying agents derived from soaps of different types depending on application. The nature of these soaps can be used to influence temperature resistance (relating to viscosity), water resistance and the chemical stability of the grease.

Those of a certain age will remember the days of ‘tractor oil universal’ and grease being just that, so if they did use a grease gun it was pot luck what was inside. And there were big buckets of grease for sucking up into an empty grease gun -- a third in the gun, a third on the outside and a third on your hands and overalls.

Today the youngsters on farm have the luxury of replaceable cartridges.

The quality of grease can vary from supplier to supplier, often reflected in the cost. So it makes sense to choose grease specifically suited to the job at hand. That might be as simple as lubricating a bearing, a universal joint or a suspension unit. Or at the other end of the spectrum, the grease might be to lubricate shafts rotating at high speed or where the lubricant might encounter foodstuffs.

A recent visit to the parts department of a John Deere dealership gave an interesting snapshot of the wide array of job specific materials on offer.

Multi-purpose grease, as the name suggests, is a good option for most situations. SD polyurea is intended for severe applications and designed to minimise wear at high speeds or under heavy loads, while also resisting heat degradation.

Lithium complex remains stable in high temperatures applications. Multi-purpose extreme duty synthetic is designed to tolerate extremes of temperature, from as cold as - 42.7 degrees C to 232 degrees C at the other end of the scale. This product uses Teflon, contains no silicon and is food grade certified, non- toxic and odourless. It is said to suit lubrication, sealing, protecting and insulating electrical components.

Other specialised products include a corn head grease that can be used in gear cases running up to 1000rpm, where it turns to a heavy gear oil as work temperature increases, but reverts to a grease after cooling, helping to reduce leaks.

HD lithium complex includes 3% molybdenum, making it suitable for withstanding shock loads or where sliding frictional forces may be high. But it doesn’t suit use in wheels or roller bearings.

So, with the harvest season near, it might be prudent to grab a box of replacement cartridges. Hopefully the Law of Sod won’t kick in the next time you grab the grease gun, only to find it runs out after two pumps.

Tractor of the future?

John Deere looks to be heading towards autonomous tractors.

John Deere has updated its lineup of 7R series tractors for 2020, with a choice of seven models from 210 to 330 horsepower.

The latest John Deere 8R series tractors, yet to be released, have already won the only gold medal at the upcoming Agtritechnica event scheduled for November.