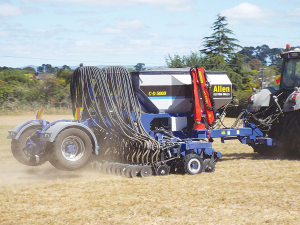 The drills are making a name for themselves in New Zealand and further afield.

The Allen drill story starts in the late 1990s when Mid-Canterbury farmer and contractor Dave Allen was looking for a heavy-duty drill for crop planting; he wanted a spec that included strength, triple discs and, most of all, cost effective operation.

The first drill was drawn on a barn floor, developing into a super-strong frame with Accord pneumatic metering to deal with small seeds and triple disc openers.

Over the years, drills manufactured for customers incorporated features that suited their individual applications, hence the following at home and overseas.

Son Craig Allen bought the business about seven years ago, and today, with his wife Deb and eight involved in fabrication and assembly, he runs the business in Ashburton.

Five basic models can be customised to suit customers’ requirements; machines are sold in Australia (it takes 25% of production), US and Europe.

Proven componentry includes the metering system whose layout has twin seed and single fertiliser tanks as the main choice; these account for 95% of sales.

Toolbars can range from 3 to 12m, with a choice of wavy ‘turbo’ opener discs or banks of scalloped cultivator discs – all mounted to the frame using a rubber sausage-style suspension system for improved shock absorption.

Twin-disc seeding coulters are mounted on a simple parallel linkage, with following press wheels helping to maintain a consistent seeding depth as well as consolidation.

Units are typically finished with a HIAB crane unit for independent loading when away from the yard.

The most popular ranges are the C-D (contour drill) and E-D (ergonomic drill) series.

The C-D series maintains the triple disc concept, with elements grouped close together to make the unit compact, said to be better for undulating terrain.

Control is via the RDS Isoscan seed rate controller, enabling control of up to four bins and monitor blockages, a 7-inch touch screen and seeding rates of 1 - 400kg/ha. Users can also choose ISOBUS control if preferred.

The E-D series is a stripped-down version, with a fixed frame and no-frills configuration, while still incorporating many of the ‘Allen’ features. This drill -- in 3m or 3.5m working widths -- is aimed at smaller farms or those with tractors up to 110hp.

Rubber-suspended coulters with individual adjustment are again followed by press wheels. The Accord seeding system can be fitted with e-drive, using a radar sensor to measure ground speed or the more up-market RDS units, offering the same ability to work at seeding rates of 1 - 400kg/ha.

No-till drill gets an upgrade

The John Deere 750A All-Till drill is a popular choice in New Zealand, offering high outputs in conventional, minimal and no-till regimes and precise seed placement.

Getting crops into the ground relies on a drill that is accurate, fast and, in these high-tech days, easy to use.

Keeping an accurate eye on seeds