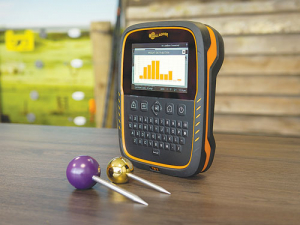 Gallagher has won the supreme award from New Zealand’s industrial design community -- a group beyond the farmgate.

It was cited for its high-quality design and functionality in the tough farm environment. Gallaghers also won, in the same category, the DINZ bronze pin for its insulated line post fencing system, a new approach that does not use steel or timber posts.

The awards judges described the scale as a complex digital management tool in a rugged but simple product, with user and location kept paramount during the entire design process.

They also appreciated the rigorous design process that included the clever post attachment and over-moulding details. It is a “truly Kiwi design in the best possible way,” they said.

The Weigh Scale were released earlier this year after Gallagher recognised the need to completely redesign a piece of equipment increasingly vital in farmers’ businesses. The work took four years -- but 15 ‘man-years’ -- and was developed through 15 prototypes.

The need for it to function in a tough, often wet, dirty environment meant it had to combine functionality with durability, while reinforcing the Gallagher brand and all it stands for.

A key feature of the Weigh Scale is its full colour display which has a high-visibility screen regardless of sunlight.

Also recognised was a need for the scale to interface easily with other gear for simple use by farmers, with an intuitive pathway easily activated via the touchscreen.

And the unit has no fiddly caps on the plug-in points at the base; plugs are instead protected by the scales’ body moulding – said to be a hit with farmers tired of having to try to fit plug protectors before or after use.

Gallagher Animal Management Systems’ marketing manager Mark Harris said the simplicity of touchscreen technology had made it a key aspect of the design process.

“We had learnt the touchscreen was the interface to deliver a simplified scale. It needed to be something any farmer would feel comfortable using, rather than just farmers already familiar with technology. It had to be as easy to use as the GPS in your car.”

It's a year for celebration as two Waikato agricultural icons pass key milestones.

2018 marks a big year for Gallagher, with its 80th anniversary and the release of several new products.