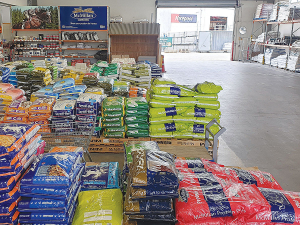 Plastic bags that rural supply merchants use to package and sell seed, feed, fertiliser and mineral supplements are currently uneconomic to recycle.

However, if the sector does not take the initiative to lift recycling to the next level, then government will impose a scheme that will cost suppliers and ultimately farmers more in the long run.

That’s the warning from Plasback – which operates a product stewardship scheme to recover used farm plastics for recycling. Chief executive Neal Shaw says that in the past 15 years, Plasback has collected more than 21,000 tonnes of silage wrap and other used plastic from farms up and down the country. The amount collected has grown steadily year-on-year, but in 2021 it jumped up sharply, assisted by Fonterra’s Co-operative Difference initiative.

Under this scheme, up to 10 cents of Fonterra shareholders’ milk payment comes from their efforts to farm sustainably, with one step taken to achieve this payment is to recycle their waste plastic. This prompted more dairy farmers to take up Plasback’s offer to pick up their used plastic directly from their properties.

The Plasback initiative sees farmers paying a small fee that covers the costs of the cartage contractor who collects the plastic from the farm.

Shaw says good product stewardship is an industry-wide responsibility, meaning that the companies that supply the plastic in the first place should also help provide a mechanism for their waste to be recycled and help cover the cost of doing so. He says that, fortunately, most silage film suppliers in New Zealand recognise this responsibility and actively support the Plasback scheme.

Many farmers not only want their silage wrap and twine collected, but also the small woven plastic bags that rural supply merchants use to package and sell seed, feed, fertiliser and mineral supplements.

The problem is that these 20kg bags are made of woven polypropylene and, unlike silage wrap and other high-density polyethylene plastics, small woven polypropylene bags have no economic value. This means if you want to recycle them, you must pay a processor to take these off your hands or deliver it to that recycler at zero cost.

Shaw says while Plasback can cover the cost of processing, baling, and shipping used silage wrap by selling it to recyclers. It is currently uneconomic for them to collect small bags from farms – leaving farmers to either store them, dump them or lose money by giving them to a recycler.

This is not a trivial issue with millions of these bags coming into NZ from China each year, to be burned or buried on farm or ending up in landfills. This is leaving the industry with the dilemma of farmers who are willing to pay a fee to recycle their woven bags and Plasback is willing to collect them, but not being able to afford to do so.

Shaw says one party missing from the recycling chain is the merchant chains who import the small polypropylene bags. He says they attach their logos to the bags then fill them with product and send them out to farms, but so far have avoided any responsibility in the cost of recovering and recycling the bags.

“This is not good product stewardship and it flies in the face of the Government’s decision to make farm plastics a priority product under the Waste Minimisation Act,” he adds. “By 2024, the industry is expected to have a recycling programme in place for all agricultural waste plastic.”

Plasback says that if rural merchants contributed to the cost of collecting the 20kg small woven polypropylene bags they sell, it would cover the costs of delivering them to a recycler.

Shaw says the agriculture sector now needs the major merchant chains and bag manufacturers/importers to step up and take the lead on this or the Government is likely to impose a compulsory programme.

He adds that there is a lot of talk in the industry about sustainability, but much of this is green washing, not being backed by actions.

“It is one thing to have ‘sustainability teams’ and ‘thought leadership’, but it is another to offer customers practical ways to deal with waste and back this up financially,” Shaw says. “The industry must be honest about the real cost of recycling small woven polypropylene bags and then join forces and share the cost of doing so.”

“Issues around sustainable packaging form a key part of our sustainability agenda,” he told Rural News. “While our work is in its early stages, we have been liaising with industry bodies and our partners to understand the options for meaningful improvements we can make to our packaging footprint.”

Cooney says recycling was the first step and currently Farmlands hosts a network of hard plastic recycling collection bins across 23 sites within its retail network on behalf of Ag Recovery.

“These sites are agnostic on who sold the plastic originally, with several sites receiving plastic waste that originated from competitor sales,” he adds.

“As a business, our view is that the long-term environmental solution is not just simply about recycling more plastic, but taking the second critical step to finding affordable, sustainable alternatives.”

Cooney says Farmlands has carried out in-house trials to review best practice in waste minimisation for feed and seed packaging and is now evaluating a proposal to take this a step further and map the total environment footprint of a particular line of animal feed sold in 10kg and 20kg bags.

“We are committed to doing more in this space and will continue to look for new ways to reduce our impact on the planet.”

Meanwhile, Farm Source group director Richard Allen told Rural News that “sustainability is at the heart of our co-op (Fonterra)”.

“At Farm Source we’re working to reduce waste by eliminating nonrecyclable packaging, facilitating recycling and using recycled materials,” he says. “More than half of our Country Mile brand now has no plastic packaging, with it either being eliminated completely or replaced with a paper-based alternative.”

Allen says Farm Source is partnering with AgRecovery and providing drop off facilities at all its stores to make it easier for farmers to recycle on-farm plastic. Last year it recycled over 400 tonnes of plastic including 71,000kg of containers from customer farms.

“The next area of focus are the 10-25kg bags of seed, feed and fertiliser with woven polypropylene to follow,” he adds.

"We are also partnering with Plasback and vendors to improve the recycling credentials of the rural sector."