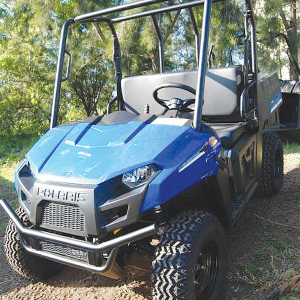 Will the side-by-side replace the ubiquitous quad on farms in NZ and Australia?

This comes with the announcement by key player Polaris that it will withdraw ATVs from its offering by October and it’s already running down stocks.

The move is brought about by the fact that Australian farmers are choosing side-by-side type vehicles, ahead of new safety rules due to kick in during the next two years. This will make operator protection devices become mandatory under the the Consumer Goods (Quad Bikes) Safety Standard 2019.

The withdrawal will affect all Polaris quad bikes – including youth models. The company will focus on the sales of side-by-sides – such as the popular Ranger model, Polaris Australia & New Zealand managing director Alan Collins said.

“Over recent years the Australian off-road vehicle market has seen farmers transition en masse from quad bikes, to side-by-side vehicles,” he explained. “Polaris has a range of 30 vehicles with ROPS, while the market shift has been helped along in no small part by the safety rebates offered by SafeWork NSW and WorkSafe Victoria.”

Polaris suggests that the contraction of the quad bike market over the past five years in favour of side-by-side vehicles, with properly engineered ROPS and factory integrated safety technologies, means the market itself would probably end up signaling the end for quad bikes over coming years anyway. An acceleration of the switch is likely to happen as the new rules take effect.

The new standard requires suppliers of new and imported second-hand quad bikes to improve information for consumers via a hang tag warning for operators and additional information in the manual from 11 October 2020. It also requires manufacturers to improve machine designs to meet certain US and European directives by the same date.

Further improvements to the design of general use quad bikes are also required to reduce the likelihood of a rollover occurring. These include using stability requirements and a need to mitigate the harm if a rollover does occur, through the fitment of operator protection devices (OPD) from 11 October 2021.

In New Zealand, Nathan Moore, national sales manager for Polaris says the company will continue to sell quad bikes here, but via a reduced line-up of core models.

“If the NZ regulatory authorities decide to mandate the fitment of OPDs, it is likely we will have to re-consider and take a similar course as that being taken in Australia.”

OPD coming on all Oz ATVs

With just a month to go before all new and secondhand imported ATVs bikes sold in Australia must be fitted with operator protection devices (OPD) and meet minimum stability requirements, one in six quad bikes for sale through dealerships do not meet the new national safety standards.

While there appears to be a gradual move towards UTV or side by sides, the ATV/quad bike still plays a major mobility role in the New Zealand rural landscape.

Proposed ATV solution may not be the answer

Recent media releases from Worksafe and ACC, picked up by media outlets, focused on workplace incidents on farms from the use of quad bikes – or All Terrain Vehicles (ATVs).