A trailer for every situation 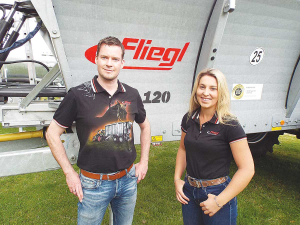 Set up in early 2019, Fliegl New Zealand has ambitious plans, to build on the work done by previous importers.

The company wants to introduce NZ farmers and growers to the Bavarian manufacturer’s extensive range of trailers, slurry tankers and manure spreaders. Claiming to be the world’s largest manufacturer of such products, with an annual output in excess of 5500 units, the family-owned company takes pride in quality by manufacturing the bulk of its key components in-house.

Featuring extensive use of galvanised components throughout, most of its tipping trailers are equipped with a clever three-way tipping system. These can be particularly useful for race maintenance or filling ruts created by travelling irrigators.

Capacities range from 2.6 to 8 tonnes in single axle format, while tandem configurations offer a range from 8 to 20 tonnes. Dedicated dump trailers are available in multiple ranges, with some units manufactured from 450 Hardox steel, allowing lighter tare weights and increased carrying capacity.

Of interest its push-off trailers that remove the need to lift high-capacity bodies, which in turn increases instability.

This removes the risk of vertical jack-knifing, often created by high volumes of material “sticking” in traditional trailer layouts.

The system also lends itself to dealing with delicate cargoes or operating in areas with restricted headroom that limits trailer capacities.

National manager Kayla White says the business, based in Milton, Otago, is focussed on providing service back up for the multiple units already operating in NZ, while also securing greater dealer representation in all the key provinces throughout the country.