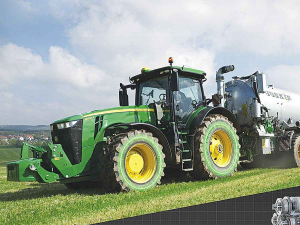 The latest John Deere 8R series tractors, yet to be released, have already won the only gold medal at the upcoming Agtritechnica event scheduled for November.

Full details are scarce, but an 8R with an electro-mechanical eAuto-Powr transmission is claimed to be the first IVT (infinitely variable transmission) of its type.

Rural News understands the layout of the new gearbox sees the integral hydraulic motors being replaced by electrical units, while an integrated generator will deliver 100kW (135hp) for secondary/external use.

To demonstrate the concept, John Deere has partnered with Belgian company Joskin, which has created a modified version of one of its tri-axle slurry tankers. The unit has both rear axles driven electrically, effectively creating an 8WD combination.

The companies say this will increase traction and reduce wheel slip, while at the tractor end the electrical portion of the gearbox will improve efficiency and reduce maintenance costs.

John Deere has launched its next generation of self-propelled sprayers.