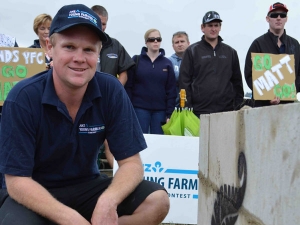 After a nail-biting finish, Matt Bell of Aorangi has been named the 2015 ANZ Young Farmer of the year.

Competition in the 47th ANZ Young Farmer Contest was fierce, with the Evening Show rounds resulting in a tie between East Coast's Sully Alsop and Aorangi's Matt Bell, before Bell won on a count-back of practical day scores.

Bell is in his first season of an equity manager's role alongside his fiancé Samantha. This was his second Grand Final, having placed 3rd in the 2013 competition held in Auckland. As competitors are only able to compete at Grand Final level twice, this was Bell's last shot at the title.

"This is the most surreal feeling, all the hard work has paid off. The blood, sweat and tears – it was all worth it!" he says.

The seven Grand Finalists were put through their paces over three days of competition in Taupo 2-4 July.

The events opened on Thursday with a shearing head-to-head challenge where competitors were to shear two sheep in front of the crowd.

In the technical elements of the competition contestants had to present a business plan, go through a panel interview and work out an HR scenario.

After the practical events, contestants were given several hours to prepare a three-minute speech and deliver it at the grand final dinner held at the Great Lake Centre, Taupo.

It was neck and neck for as contestants battled through the final hurdle of quick-fire question rounds. It was an extremely close quiz show with Sully Alsop and Matt Bell tied for first place. Upon count-back Matt was announced the 2015 ANZ Young Farmer Contest.

Bell says he looks forward to the opportunities winning the contest will now offer. "One of the things I am looking forward to is being able to go into schools and communities and have the profile as well as the influence to help change the perception of agriculture. Our industry is the backbone of New Zealand, it's time that was realised."

He also thanked the contest's family of 10 sponsors as well as his supporters who travelled from mid-Canterbury to watch him compete.

Bell went home with nearly $75,000 in prizes including $10,000 cash from ANZ and entrance to Kellogg's Rural Leadership Programme from Lincoln University valued at $6,000.