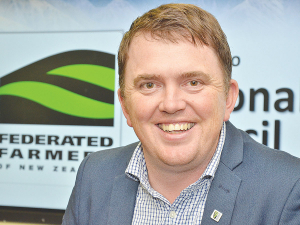 Milk processors will be forking out $9/kgMS or more for farmers' milk, eclipsing the record payout of 2013-14.

However, the gloss has been taken off the record milk price by high input costs and a severe drought that affected milk production - especially in Waikato and Southland.

According to NZX analyst Amy Castleton, when adjusted for inflation, Fonterra's mid-point milk price of $9.30/kgMS for last season equates to just $6.46/kgMS. Castleton says inflation "knocks quite a bit out" of the forecast payout.

Federated Farmers dairy chair Wayne Langford told Rural News that rising input costs and the drop in prodution - between 10% and 15% in some regions - has taken the cream off.

Langford syas there's a weird feeling among farmers right now - the payout is high, but they aren't seeing the extra money in their accounts.

"No one is struggling but we are missing out on that cream; the extra one or two dollars per kgMS that we should be seeing in the bank."

Langford believes the next six months will be telling for farmers.

"We will be spending 70% of our costs in the first six months of the season," he says.

These include cultivation, agri chemicals, regrassing and baleage and silage.

"I think we will really notice the full effects of the price rise then," he says.

Fonterra last month announced an opening forecast milk price range for the new season of $8.25 - $9.75/kgMS, with a midpoint of $9/kgMS.

Listed milk processor Synlait is opening with $9/kgMS. Open Country Dairy, which pays its suppliers in full four times a year, has a range of $9.40 to $9.70/kgMS for milk supplied between June and September and paid full in November.

Castleton says while the season is a good one in terms of milk price, there is a lot of turmoil. She adds that milk production remains constained and this is pushing prices up.

However, fuel, fertiliser and feed costs are soaring as a result of the Ukraine war.

"On the supply side, growth from key milk producing regions is expected to remain constrained as high feed, fertiliser and energy costs continue to impact production volumes."

He says these demand and supply dynamics are expected to support dairy prices in the medium to long-term.

"However, we are operating in an increasingly volatile global environment and are managing a wider range of risks than usual," Hurrell adds.

"Despite these two factors, the 2022-23 season final milk price will still depend on an ever-evolving global situation," says Watson.