Westland lifts its prediction for 2015-16 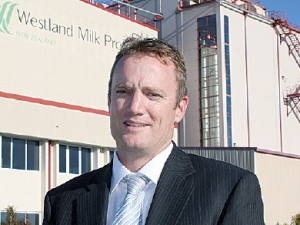 Westland chief executive Rod Quin says the 2015-16 budget represents a balance of many factors. "While it might be more optimistic than some in the New Zealand dairy industry, it is our considered forecast of the expected outcomes for the approaching season."

While Westland expects dairy prices to recover as the 2015-16 season progresses, Quin says they are expected to remain relatively low due to ongoing milk supply pressure from the United States and the European Union. One bright spot is that Chinese whole milk powder buyers are expected to return with more demand in early 2016.

"The reality for the dairy industry," Quin says, "is that we are in uncharted territory, with at least three major changes impacting global dynamics:

1. The removal of EU milk quotas after 30 years, but the retention of their protectionist import duties;

2. Ongoing sanctions against Russia and;

"In any single season, one of these factors would cause major uncertainty. It is the combination of all three occurring within this season, with impacts into 2015-16, that has created global disruption."

Quin says Westland considered all these factors in setting its budget. The company expects prices to start on the road to recovery later in 2015 and Chinese customers to increase demand early in 2016.

"That said, we don't expect large price increases, rather a recovery for milk powders by the end of the season to a figure around US$3000/MT."

"This is based on the expected need for cash required on farms to keep milk production as high as possible, while the company has robust cash flows and manageable working capital headroom."

Westland's increasing move into nutritional products is also a factor in the co-operative's higher predictions for 2015-16, as increasing levels of value-added production drive higher and more sustainable payouts. Included in the budget are the third season of nutritional production from Dryer 6 and the first season of nutritionals from Dryer 7, limited sales from the new UHT plant at Rolleston, and higher returns from Westland's EasiYo subsidiary.