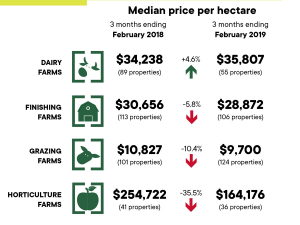 Brian Peacocke, Rural Spokesman, at REINZ says the easing in total sales volumes for the three month period ending February 2019 is the main point contained in the sales data just released, particularly so for the dairy sector.

“Weather conditions have again been a major influence with a booming later spring followed quickly by an extremely dry summer period leading into semi-drought and fire hazard conditions in many parts of the country.

“Healthy product returns continue to reward diligent producers with real strength being shown in the beef, lamb, grain, timber and horticultural categories and partly in response to a weather-induced reduction in dairy output, pleasing improvements in the Global Dairy Trade auction prices for the dairy sector.

“For some farmers, however, those returns have not been sufficient to change their decision to exit the rural industry, as evidenced by the high number of farms on the market in recent months, these decisions in turn being based on frustrations relating to issues including, but not limited to, labour, compliance and margin-squeezing cost increases,” he says.

A significant number of lifestyle block owners may have to pay a capital gains tax on their family home, warns the Real Estate Institute of NZ.