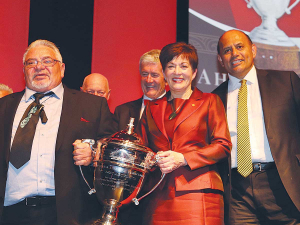 The winners of this year’s Ahuwhenua Trophy for Excellence in Horticulture believed they didn’t stand a chance and never expected to win because their fellow finalists had bigger operations.

But to his surprise and delight, Norm Carter, chairman Te Kaha 15B Hineora Orchard, was called to the stage in Rotorua last week in front of more than 750 dignitaries and whānau at a special gala awards dinner to receive the prestigious trophy. As the announcement was made by from the Governor General Dame Patsy Reddy, there were cries of jubilation from the Te Kaha group and they all quickly gathered on the stage to celebrate their success.

This is the first time in the 87 year history of the competition that the trophy has been awarded for horticulture. In the past, it has been for sheep and beef and dairy.

Prior to the trust’s creation in 1970, the land was largely occupied by different whānau who farmed the block, maintaining a subsistence living growing a range of fruit and vegetables for the local community. The trust now produces 133,000 trays of G3 SunGold kiwifruit and is due to assume full ownership of the land in about three years’ time.

Carter says the win has really put Te Kaha on the map. He says his people have achieved a lot over the years and the win also has some special significance for them.

“Bill Swinton won the first Ahuwhenua cup in 1933 and he was a dairy farmer from nearby Raukokore, and we are related to him. So, for us to win the inaugural horticultural trophy 87 years on is really awesome,” he told Rural News.

Carter says about half their people live in Perth in Australia and he hopes that the trust’s winning of the trophy will encourage many to return home and get into meaningful employment locally. He says while they can’t expand their operation, they hope to assist other whānau to invest in their properties and have something to leave to their children and grandchildren.

Chairman of the Ahuwhenua Management Committee that runs the competition, Kingi Smiler, says Te Kaha 15B Hineora Orchard is a worthy winner of the competition. Smiler says, like the other finalists – Otama Marere from Te Puke and Ngai Tukairangi from Tauranga – their operations are something their whānau can feel proud of.

“The trustees of Te Kaha have shown great vision, persistence and resilience to establish their operation and to achieve some impressive results,” he says.

Smiler believes all three finalists have set a benchmark for future entrants in this competition, which will be hard to eclipse.

“What makes it all the more impressive is that they have done this in one of the most difficult times in the history of the country and they, Maori and the whole country should be proud of their efforts,” he says.