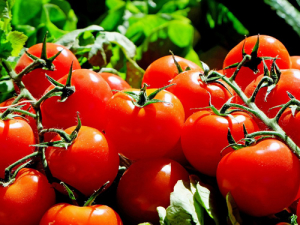 Tomatoes NZ is the latest industry group to sign up to a biosecurity partnership with government.

Tomatoes NZ is the latest industry group to sign up to a biosecurity partnership with government.

Tomatoes NZ signed the Deed of the Government Industry Agreement (GIA) for Biosecurity Readiness and Response at Parliament with Nathan Guy, Minister for Primary Industries in attendance.

“The signing of the GIA Deed is an important step to securing the future growth of our industry,” says Alasdair MacLeod, chair of Tomatoes New Zealand which represents New Zealand’s 149 commercial fresh tomato growers.

“New Zealand’s tomato industry has an ambitious goal to double in value, from $100m to $200m, by 2020. Biosecurity incursions are our biggest threat to achieving that. With growing numbers of tourists to our shores and a warming climate, it’s now more likely than ever before that foreign pests will establish themselves in New Zealand,” says MacLeod.

There are many tomato pests, viruses and diseases impacting on tomato production overseas that have the potential to have a major impact on production here if they were to arrive. For example, the arrival in 2006 of Tomato Potato Psyllid (TPP) costs the tomato industry an estimated $761,000 annually in control costs, lost production and increased compliance.

“The best way to protect New Zealand’s horticulture industry is through excellent border security, strong preparation for possible incursions and a rapid response when unwanted pests do arrive, to eradicate them quickly and effectively,” says MacLeod.

“Tomatoes NZ recognised early on that becoming a signatory to the GIA Deed would benefit fresh tomato growers by giving us a seat at the table with government and a greater say in preparing for and managing biosecurity risks specific to our industry.”

GIA secretariat manager Steve Rich agreed, saying he was pleased that the tomato sector has recognised the benefits of joining with industry and government and seeing how this can deliver better outcomes.

“Tomatoes NZ joins the growing number of industry groups prepared to take responsibility to manage biosecurity risks within their sector. GIA offers value in terms of working together to maximise the collective strengths of the partnership,” says Rich.

The tomato industry is New Zealand’s second largest vegetable sector, equal to onions, worth $118m at the farm gate. Abou 42,000 metric tonnes are grown mainly in 120ha of greenhouses, predominantly in the regions of Auckland/Waikato, Central North Island, Nelson/Marlborough and Christchurch.

Guy says biosecurity is his number one priority as Minister and as the recent Biosecurity 2025 document points out, it is a shared responsibility requiring everyone’s input and expertise.

TomatoesNZ represents the commercial fresh tomato sector which produces fruit worth approximately $100 million annually, including an estimated $8-9 million in exports.