The wet, the dry and the ugly 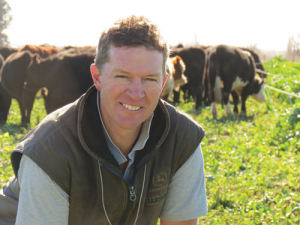 Hawkes Bay Fed Farmers chair Will Foley is setting up a drought committee.

A bizarre weather pattern is dividing the country right down the middle, with some areas facing serious drought and others swamped with too much rain.

Primary Industry Minister Nathan Guy has been to one of the drier regions, Northland, and says unless there is rain soon a drought may be declared. Likewise, he says, Hawkes Bay, Gisborne, parts of the Bay of Plenty and North Canterbury are on his watch list.

On the other hand, Guy says, farmers in some western parts of the country are wondering when they will next see the sun.

Lisa Murray, of MetService, says this summer has been an extension of spring, and the country is effectively divided in two by the weather patterns. In many western areas farmers can’t harvest crops because the ground is so wet and other crops in these areas are much later maturing than normal.

“Conversely, Northland, Coromandel, Gisborne and Hawke’s Bay are particularly dry. For example, in January Napier had just 4.5mm of rain, whereas it usually gets 64mm in that month,” she told Rural News. “Even the new weather patterns mean there isn’t a lot of rainfall on the cards for Hawke’s Bay. Some farmers there have to buy water just to do their washing.”

Murray says a weak la Nina pattern has the country in a neutral phase, opening it up all sorts of variations.

Federated Farmers Hawke’s Bay provincial president, Will Foley, is looking at setting up a drought committee because of the region’s plight.

“A week ago I was saying this is the normal Hawke’s Bay dry except it came a bit earlier than normal, but now I think it’s got beyond that – another week with no rain and no decent rain forecast.

“On top of that are the poor returns for sheep. The wool price has collapsed and as in most regions lambs have been well back on their weaning weights. Now farmers are offloading them as stores and at low prices because they have run out of feed, so it’s a double whammy.”

Foley says there is virtually no feed left for sheep and only cattle feed available. He reckons even farmers who have grown crops are now watching these shrivel up because of the lack of rain. Dairy farmers in the region have also been badly hit by the dry spell, some facing the prospect of drying off their cows early.

But it’s not all bad news, he says. “The other side of the North Island is in a better position, giving those of us on the East Coast an outlet for our store stock. There has been plenty of demand for cattle and lambs as well. We could be looking at a lot less for our lambs if this demand wasn’t there so that’s one thing to be thankful for.”

Meanwhile, Beef + Lamb NZ chairman James Parsons says where he lives in Northland it is exceptionally dry and reports from Hawke’s Bay suggest farmers there are in a similar position. He says it appears the lamb carcase weights are ahead of last year on average, but the kill is back.

“Farmers say it is taking longer to finish animals because even in ‘wet’ regions there hasn’t been enough goodness in the grass. Some are waiting for their animals to put on more weight before they send them to the works.”

Parsons says it’s good news the lamb schedule is holding up and there is more interest in sheepmeat from China.