The toast of the Coast 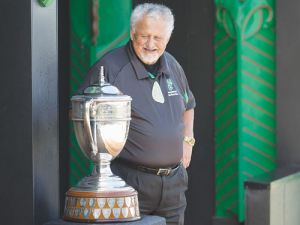 About 130 people turned out to a field day at a Hokitika dairy farm, a finalist in this year’s Ahuwhenua Trophy competition.

The competition, started in 1933 by the Maori leader Sir Apirana Ngata and the Governor-General Lord Bledisloe, showcases excellence in Maori farming and encourages Maori farmers to improve their production and environmental work.

Finalists are required to run a field day to show their farm and its features to other farmers and to the judges.

James Russell, chairman of the proprietors of Mawhera Incorporation, says the field day was a great success, attracting other farmers on the West Coast and visitors from other regions.

“We had a welcome at our marae and then presentations about the farm by various members of our trust.

“Then three buses took the visitors around the farm to see what we have achieved,” he told Rural News.

“There were two stops along the way at which our sharemilkers Mark and Debbie Van Beek, who have been with us since 2006, talked about animal performance and other aspects of our farming operation.”

Also present were the mayor of Hokitika and other local government people.

They had talked before about entering the farm in the Ahuwhenua Trophy competition, but didn’t feel ready. However, when Rakaia Incorporation won the Trophy in 2016, Mawhera thought it was an appropriate time to enter.

“To become a finalist is an honour and a privilege,” he says.

Chairman of the Ahuwhenua Trophy competition, Kingi Smiler, says the field days are a great feature of the contest. They enable finalists to tell the history of their property, how it has been developed and to highlight their achievements.

Smiler says the field day at Mawhera attracted 120 people and this shows how interested the local people are in seeing what the incorporation has achieved and what its goals are for the future.

“It is one thing to read about the achievements of a farming enterprise, but then you can go out and see the land and cows and meet the people and take in the environment in which they operate.”

Smiler says it has been a very difficult year because of the erratic weather for Mawhera Incorporation and other West Coast dairy farmers. But their resilience in dealing with the difficult weather has produced a fine result and a good looking farm.

The winner of the award will be announced at a function at the Wigram Air Force Museum in Christchurch on Friday May 25.