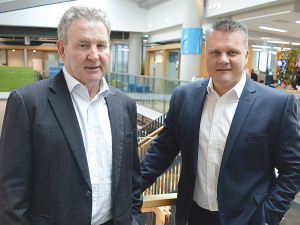 As we approach another year’s end we again highlight our annual review of 2019 in the primary sector as seen by Rural News’ editorial team.

Good messaging award: Dairy Women’s Network’s new chief executive Jules Benton for her clear, confident and articulate communication of the network’s aims and aspirations, but in a real and down-to-earth manner.

Celebrating success: A lot of excellent events and conferences this year with a focus on celebrating the success of old and young people. The Massey Ag students’ dinner is a great example of this where some very smart future leaders come to the fore. The same for the Ahuwhenua Awards where Maori agri success is also celebrated in style. Feds, HortNZ and the dairy industry and others all did their bit to show NZ that the ag sector is well placed for the future.

- James Stewart – dairy farmer Manawatu for his passion and innovation and commitment to connecting with urban communities and showing the great side of dairy farming.

- Pania and Eugene King – winners of the Ahuwhenua Trophy this year. Amazing work ethic which has been duly rewarded

- Whangara farms and its manager Richard Scholefield – a Maori-owned East Coast farm which is now recognised internationally for its general excellence and sustainability.

Good and bad: Beef + LambNZ and DairyNZ for still fighting the good fight for their levy payers on the crazy freshwater proposals promoted by the current Government. Meanwhile, both organisations’ cosy collaboration with the Government over the Zero Carbon Bill had many in the sector questioning if the farmer-funded bodies had become too Quisling-like in their efforts to bend over to the Beehive’s political aspirations.

Doing its job: Federated Farmers takes plenty of stick, especially from coalition politicians and some industry bodies which appear to spend most of their time currying favour with the current Government. However, the Feds have stayed firmly in their lane, criticising policies they believe will negatively impact on the farming sector and not wavering in their criticism – or praise – of the Government when it is warranted. While this may not earn the Feds brownie points with those in power, it is exactly the job the farmer organisation should be doing.

Keeping on keeping on: The hort sector’s fortunes continue to rise and rise. Notably there’s the country’s booming kiwifruit industry, helped along by pipfruit, avocados, summerfruit and even the humble spud. But will NZers ever get the fact that taking productive horticultural land for housing is pushing up the price of produce and seriously risks the country having to import fruit and veg to feed our growing population?

Back to the stone age: Forcing rural women to give birth on the side of the road, the Southern District Health Board should hang its collective head in shame after its botched restructuring of maternity services. One midwife preferred that her patient give birth in the ambulance than at the Lumsden ‘mother and child’ centre which had no equipment.

What are they smoking?: It is good to see some individual initiatives – along with a Government plan – to try to get more people to work in the agri sector. However, a major issue is the country’s serious drug problem. Growers and farmers can’t employ many people because they keep failing drug tests. So, what is the Government’s answer? To have a referendum on legalising marijuana! Unbelievable!

The bowing to the inevitable award: Westland Milk Products shareholders voting overwhelmingly to sell their co-op to the Chinese dairy giant Yili.

As one shareholder said: “It’s like shooting your old dog that you know needs shooting. It doesn’t mean you enjoy it.”

How did they manage it: Despite good prices for almost all NZ’s primary exports, uncertainty and despondency abound in the rural sector. All this is while farmers grapple with the Government’s attempts to dump a mishmash of new rules, policies and regulations on them. Despite all the talk about how much they value the primary sector, in truth getting re-elected is far more important to Jacinda, Winston and co than a vibrant agri economy.

Early onset hubris: Agriculture Minister Damien O’Connor was once seen as the lone champion of the farming sector in a very liberal-urban Labour party. Sadly, O’Connor seems to be suffering an early case of ministerial out-of-touchness and arrogance – after only two years in the job. Usually, it take governments and ministers two to three terms to become so arrogantly dismissive of the electorate.

Maybe it is time he headed for retirement.

Shouldn’t he be called Dick: Two words – Shane Jones! It is bad enough this blow-hard, megalomaniac has been given control of the $3 billion slush fund known as the PGF. But his big mouth and ego are destroying any chance of NZ First ever getting any rural votes. Calling farmers whiners, rednecks and political enemies is a strange way to garner rural votes.

Yada, yada, yada: To all the so-called animal rights activists, vegans, eco-terrorists, end-of-world doomsayers, local and international NGOs and other serial nutters who continually publicly demonise the agri sector. While these groups and their supporters are happy to benefit from a buoyant economy – funded by our primary sector exports – they seem to derive great pleasure in kicking the industry and farmers in the guts at every opportunity with silly slogan politics such as ‘too many cows’ and calling ‘industrial’ agriculture the main polluter. We can’t decide if they are traitors or idiots, and if some are being paid by the taxpayer to protest for living.

The terrible timing award: To MPI for logging a big increase in the number of farms suspected of carrying Mycoplasma bovis late in 2018, but not gearing up to tackle them until Easter this year, resulting in the infamous ‘surge’ in lockdowns and movement controls which couldn’t have come at a worse time for farmers heading into the winter grazing season.

Time to give up: Strong wool has been in the doldrums forever and there is no sign of this changing. Moves by the sector and the Government to set up working groups and talkfests on improving wool’s fortunes will make no difference.

Fonterra has the special distinction of making it into all three categories this year.

The good: With a new Kiwi chief executive, Miles Hurrell, at the helm, and a change in chairmanship signalled before the end of 2020, Fonterra finally had some good news for the market. Its first quarter results, released this month, show expenses are down, gross margin up and an improved cashflow.

The ugly: The bad news drew an ugly response from farmers: at its annual meeting last month, some openly called for the chairman John Monaghan to accept responsibility and step down. Farmers questioned how and why the board and a management team drawing millions in salaries allowed the co-op to hit the rocks. Gone are the aspirations to become a global dairy giant: Fonterra is now positioning itself as a NZ dairy co-op with no intention of owning milk pools around the globe.

IT'S BEEN a big year for agriculture with the rise and fall – and still falling – of dairying prices. And for the first time in many years, sheep and beef farmers are feeling good – or is it that they know dairy aren’t in such a happy frame of mind? We take a look back on the year to see what was good, what was bad and what was downright ugly…