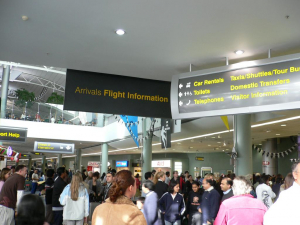 The Ministry for Primary Industries (MPI) has named its first litter of a super breed of biosecurity detector puppies.
The 6 puppies were born on 24 November from a beagle and a harrier hound – the first time MPI had crossed these breeds for detection work. MPI announced the names at a ceremony on Sunday where the puppies got to meet the foster families who will help look after the dogs before they start formal training as biosecurity sniffers. The names are Hattie, Halo, Huia, Haze, Harley and Hunter. Harley was chosen by children at Auckland’s Starship Hospital from names suggested by the public. MPI detection technology manager Brett Hickman says MPI has high hopes for the puppies, which will grow to about the size of a labrador. "We normally use beagles as biosecurity dogs. The beagle-harrier crosses will be taller than beagles, making it easier for them to sniff backpacks and airport luggage stacked on trolleys." If the new puppies pass their training, they will start work in 2018 detecting food and other items that pose biosecurity risk to New Zealand. Hickman says MPI has 60 biosecurity detector dog teams operating at New Zealand airports and ports. “They are an essential part of New Zealand’s biosecurity defences, particularly when it comes to locating seeds and other smaller risk items that can be hard to detect by baggage x-ray screening.”
Tweet